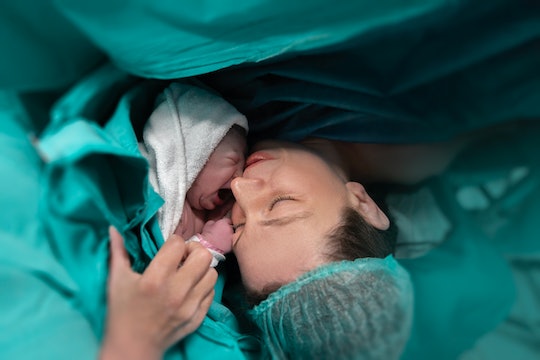 All The Reasons Why You Might Have A C-Section

There are only two ways to deliver a baby: vaginally or via cesarean section. While the body is biologically built to deliver vaginally, that’s not always the safest option for mom or baby, and in that case a C-section is the better option. While this may sound scary on the surface, there are all kinds of reasons for a C-section delivery, and most of them aren’t even considered an emergency.

For people giving birth to their first baby, the chance of undergoing a C-section delivery is relatively low. “Almost one-fourth of first-time births [are delivered via C-section],” OB-GYN Michael A. Belmonte, M.D., tells Romper in an email, and around one-third of all total births in the U.S. are C-section deliveries. Essentially, it’s common enough that you can rest assured your doctor knows what they’re doing in the operating room, but not so common that you should assume that’s where you’ll end up.

If your mind immediately jumps to the worst case scenario of an emergency C-section, then take a deep breath, because that is just one of the many reasons for a C-section, and the others are not nearly as scary to think about. In fact, you might even know ahead of time if it’s the safest option for you, which allows you to prepare emotionally, mentally, and logistically. Here are some reasons why your provider may suggest a C-section delivery.

Reasons for a planned C-section

History of prior C-section

“Generally speaking, the most common reason why women get C-sections is because they’ve had one before,” OB-GYN Jonathon D. Jaqua, D.O., tells Romper. Similarly, Belmonte says if someone has had uterine surgery in the past, then delivering via C-section may be their best option.

However, this is not to say that everyone who has had a C-section in the past will go on to have one again. Some are given the option to deliver vaginally with subsequent pregnancies — which is called a VBAC delivery — however, several factors are considered to ensure this delivery method would be safe for mom and baby. Assuming vaginal delivery is an option, the birthing parent gets to choose which birth plan they’d like to move forward with.

Baby is not in a head-down position

Another reason for a C-section delivery is malpresentation, which means the baby is not in a head-down position. “The safest way to deliver the baby [in this situation] is via C-section,” says Jaqua. Of course, he explains, providers will try a few methods to get the baby into the head-down position before moving forward with a C-section, but if they’re not successful then it’s the lower risk option for delivery.

Other reasons for a planned C-section

Reasons for an unplanned C-section

One common reason for an unplanned C-section is when labor stops progressing. “If active labor is occurring and the cervix dilates to a certain point and then stops, that that’s reason for a C-section,” explains Jaqua. In this situation, a provider won’t just jump right to a C-section, though. They will administer medication to make contractions stronger to try to get the cervix to dilate further. If that doesn’t work, then they’ll move forward with a C-section.

Another reason for an unplanned C-section is if the baby isn’t progressing through the birth canal. In this case, Jaqua says the birthing parent will often be pushing for a long time (hours) before the provider makes the call to switch to C-section.

Remember, providers will closely monitor the baby throughout these situations, and if there are signs that the baby’s in distress, they’ll work with a little more urgency. “The act of labor and delivery is stressful for the baby, and that’s actually a good thing,” says Jaqua, “but it’s when the stress gets beyond a certain point [that it becomes an emergency situation] and we try very hard to monitor closely so we do not get to that tipping point.”

Finally, there are emergency C-sections. “Typically, an emergency C-section would be required in situations where there is a threat to the safety of the fetus or birthing parent,” says Belmonte. There are a variety of reasons this may occur, such as heavy bleeding, a decrease in fetal heartbeat that isn’t improving, or an umbilical cord prolapse (when the umbilical cord tries to deliver before the baby). In an emergency C-section situation, medical staff will move quickly to get the baby (or babies) delivered as fast as possible so that they can then focus on stabilizing it or the birthing parent without the stress of labor.

When you’re pregnant and you start thinking about the possibility of a C-section, your mind may immediately jump to the scary emergency scenarios, but there are so many reasons for a C-section delivery, and most of them are simply because it’s the delivery method with the lowest risk. So, take a deep breath, because chances are very high that you have nothing to worry about no matter how you end up delivering your baby.