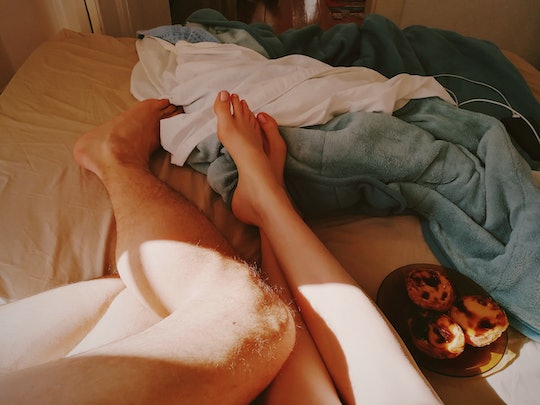 All Your Questions About Having Sex After Taking Plan B Answered

It can help prevent pregnancy after sex, but before is a different story.

It happens: a condom breaks, pull-and-pray becomes more pray than pull, or you realize you skipped a birth control pill. Thankfully modern medicine has made it so that if you’re not trying to get pregnant and you think there’s a chance you accidentally did, you can take emergency contraception, like Plan B, that significantly lowers the chances of getting pregnant. But if you’re wondering if you can have sex after taking Plan B (sometimes called the morning after pill), then you’ve come to the right place.

Romper spoke with Kelly Cleland, executive director of the American Society for Emergency Contraception, and Dr. Kelly Culwell, board-certified OB/GYN and women’s health expert to find out everything you’ll need to know about having sex after taking Plan B.

Can You Have Sex After Taking Plan B?

You can have sex after taking Plan B if (and this is a very big if!) you have protected sex. Plan B does not work to prevent pregnancy when taken before intercourse. “Plan B only works for a single act of sex and only within five days of unprotected sex (though it is much more effective if you use it as soon as possible after unprotected sex, preferably within three days),” Dr. Culwell says. “If you have sex later in the cycle after taking Plan B and without using another form of contraception, you can definitely get pregnant.”

“Plan B is meant to be used after unprotected sex, not before,” Cleland adds. So in short, you can have protected sex after taking Plan B if you’re up for it (though in the days after you may experience some side effects, like nausea, headaches, abdominal pain, breast tenderness, dizziness, and vomiting—which probably won’t make you super in the mood). If you’re not trying to get pregnant it’s really important to use a condom or a diaphragm, even if you’re on birth control, as it takes seven days of taking consecutive hormonal pills for the body to become protected again after skipping two or more birth control pills, per Cornell Health.

How Does Plan B Work?

It’s a common misconception that Plan B is the same as the abortion pill, but that is not true; Plan B does not cause abortion or miscarriage. Instead, Plan B has an active ingredient called levonorgestrel, which works by delaying ovulation.

“Given that Plan B delays ovulation, having sex without contraception after Plan B might end up increasing your chances of getting pregnant by timing intercourse around the time of ovulation,” Dr. Culwell says.

There is also a chance that the opposite could be true, though it’s not smart to bank on this happening. “Depending on where someone is in their cycle, it’s possible that Plan B could still prevent pregnancy if they have sex after taking it, but this hasn’t been studied and it’s not worth the risk. To be on the safe side, avoid having unprotected sex after taking Plan B,” Cleland tells Romper.

It’s also important to note that once your luteinizing hormone (LH) surges, which means ovulation is imminent, Plan B can no longer delay ovulation as the drug actually works by suppressing the rise of LH, so the brain does not get the signal to drop an egg (aka ovulate).

“It’s all about timing,” Cleland says. “Plan B only works if it’s taken before the luteinizing hormone (or LH) surge begins. Once the LH surge has started, Plan B can’t prevent ovulation anymore; that’s why it’s so important to take it right away, especially since most people don’t know exactly where they are in their cycle.”

While rare, it’s still possible to get pregnant after taking Plan B, and keep in mind that Plan B can make your next period unpredictable; you may be late or experience spotting, so there may be a reason you’re late after taking Plan B that is not because you’re pregnant.

Are There Other Emergency Contraceptives Available Besides Plan B?

Plan B can be a lifesaver in those panicky hours when you realize you’ve had unprotected sex. It’s available over-the-counter, and it’s not age or sex-restricted. Essentially anyone who needs it can get it. And while it’s a convenient and safe emergency contraceptive, it’s not the only one out there.

“The prescription pill (Ella) is more effective for everyone because it works closer to the time of ovulation. You have up to five days after unprotected sex to take it, but Ella should also be taken as soon as possible,” Cleland says. She adds that you can also get a copper IUD inserted after sex. “It’s nearly 100% effective as an emergency contraceptive and provides at least 12 years of great contraceptive protection if you want to keep it, and effectiveness isn’t impacted by weight.”

The good news is that “there are no serious adverse events from frequent Plan B use,” Dr. Culwell says, but frequent use can get expensive and “it’s far less effective than regular contraceptive methods. If you are using Plan B a lot, you might consider getting on a regular contraceptive.”