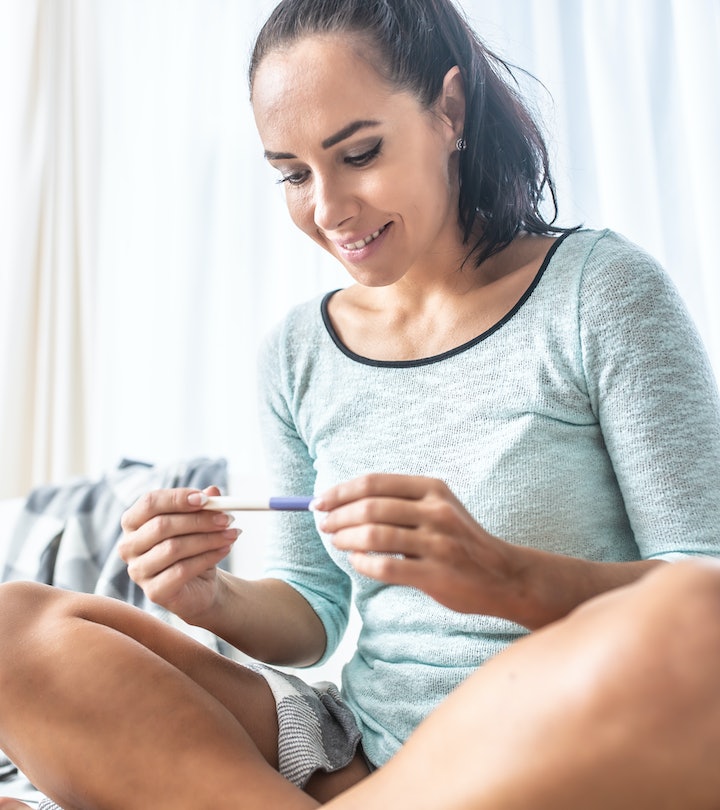 How To Figure Out When You’re The Most Fertile

Because when trying to conceive, timing is everything.

When my husband and I finally made the monumental decision that we were ready to start a family, I instantly went from wanting a baby “at some point” to wanting a baby right. this. second. It was like a switch flipped in my brain. What vitamins did I need to take? Could I drink coffee? How do I make my womb the most hospitable? But the most important question as we began trying was, of course, when am I most fertile?

After years of sex ed (and even more time spent playing Sims), I was pretty sure that one romp in the sheets was all it took to get pregnant. And, sure, that’s how it works for some people – but for others, there’s a lot more planning and strategy involved. When the baby fever is in full force, the most helpful thing you can do is take some time to truly understand your cycle, pinpoint the time that you’re most likely to conceive, and, most importantly, get busy in this window of peak fertility!

We all know the basics: in order to conceive, you need sperm to meet egg. In order for that to happen, there needs to be an egg available in the first place! “Every month, roughly 10 to 21 days after the start of a menstrual period, an egg is released from an ovary in a process called ovulation,” explains Dr. Juan Alvarez, a double-board certified reproductive endocrinologist with Fertility Centers of Illinois. “As an egg travels down the fallopian tube in the hopes of being fertilized by a sperm, it will survive for up to 24 hours before the ‘conception window’ closes until the next monthly cycle.”

In other words, to get pregnant, a couple needs to have sex during this “conception window.” A woman is most fertile in the lead up to and day of ovulation. Dr. Prati Sharma, an associate physician at CREATE Fertility Centre and an assistant professor in the Department of Obstetrics and Gynecology at the University of Toronto, talks specifics. “Typically, if a woman has regular cycles, peak fertility is in the two to four days preceding ovulation; i.e. with a 28-day cycle, day 10 to 14,” explains Dr. Sharma.

Now that you know the importance of having sex prior to and during ovulation, it’s a matter of figuring out when, exactly, you’re ovulating. While this is a generally straightforward task if you have a “typical” 28-day cycle, many of us don’t. When cycles are longer or shorter than that, it can be a bit trickier to determine your fertile window. Luckily, there are several different methods you can use to track your cycle and figure out exactly when ovulation is about to occur.

The simplest way to keep track of your cycles and determine when you’re ovulating is by keeping an accurate menstrual calendar. Free apps like Ovia, Clue, Glow, and Flo, use data you input about your period each month to predict your fertile window. You already use your phone for everything else... why not use it to make a baby? This method is extremely user-friendly, though it may not work with extremely irregular cycles.

When you’re trying to conceive, you may pee on more sticks and strips than you ever thought possible. “Ovulation test strips are an easy and affordable way to confirm ovulation,” explains Dr. Alvarez. “The test strips detect the amount of luteinizing hormone in your urine, an indicator that ovulation is happening or about to happen.” (Pro tip from a budget-conscious woman who over-tests: you can buy massive packs of ovulation test strips and pregnancy tests on Amazon. Don’t waste your money on expensive drug store tests!)

Your cervical mucus can also offer insight into your most fertile time. The same hormones that control your menstrual cycle also cause your cervix to make mucus, according to Planned Parenthood, and this mucus changes in color, consistency, and texture throughout your cycle.

In order to use this method effectively, you’ll need to track and observe your cervical mucus for at least one cycle. “Usually, you have the most mucus right before ovulation. It’s clear and it feels slippery — kind of like raw egg whites — and can be stretched between your fingers,” explains Planned Parenthood. This is when you’re most likely to get pregnant. These changes in cervical mucus around the time of ovulation might be accompanied by symptoms like abdominal pain, explains Dr. Sharma, and you can use these symptoms to monitor ovulation “if they can be reproduced with each cycle and are consistent.”

Another way some women track their cycles and fertile windows involves taking their basal body temperature (BBT). However, warns Dr. Alvarez, this method can be unreliable, cumbersome, and complicated. In order to track this, you’ll need to keep a BBT thermometer next to your bed. Before you do anything each morning, take your temperature and write it down. “The BBT will remain consistent until right before ovulation, when it will go down very slightly, then jump back up and stay elevated — a sign that ovulation has occurred,” says Dr. Alvarez. Some women swear by this method, while others have difficulty spotting trends or doing it consistently. And you won’t know you’ve ovulated until the day after ovulation, when you see your temperature dip back down.

Optimal Time Of Day For Sex

If you’ve been surfing TTC forums or reading old wives tales, you may have been told that when you’re trying to get pregnant, morning sex is the way to go. The thought process behind this? A man’s sperm count is slightly higher in the morning, and, in theory, more swimmers means more chances to fertilize the egg. However, Dr. Alan Copperman, Director of the Division of Reproductive Endocrinology and Infertility and Vice-Chairman of the Department of Obstetrics, Gynecology and Reproductive Science at Mount Sinai Medical Center, says there isn’t truth to this. “The time of day should neither influence the quality of the sperm nor the likelihood of fertilization or implantation — the key is that the sperm arrive before the egg is released,” Dr. Copperman tells Romper.

In fact, for couples with busy schedules (or early rising children) who don’t have time for morning sex, trying to pencil that in can hinder, instead of help. “It is important to be relaxed to be able to ensure successful intercourse happens,” reminds Dr. Sharma. In other words, have sex during whatever time of day works best for your schedule — just make sure it’s during that fertile window!

You’ve figured out when you’re most fertile, and now it’s time to get it on. And you’re on a mission: having sex three times a day will make you three times as likely to get pregnant, right?

If you’ve got free time and a desire to do that, go for it, but don’t stress yourself out if not. “For most couples, intercourse daily or every other day during the fertile window provides an optimal chance for conception, “says Dr. Copperman. “More or less often probably won’t help and may actually lower chances.”

Tracking your cycle and collecting data like an amateur scientist without getting a positive pregnancy test can feel incredibly discouraging and even heartbreaking. “If six months go by without success, it may be time to seek consultation with a reproductive endocrinologist to evaluate the eggs, tubes, sperm, uterus, or timing,” says Dr. Copperman. For some couples, figuring out the timing is all it takes to conceive. For others, a little more assistance might be needed.

Dr. Prati Sharma, associate physician at CREATE Fertility Centre and assistant professor in the Department of Obstetrics and Gynecology at the University of Toronto

Dr. Alan Copperman, Director of the Division of Reproductive Endocrinology and Infertility and Vice-Chairman of the Department of Obstetrics, Gynecology and Reproductive Science at Mount Sinai Medical Center