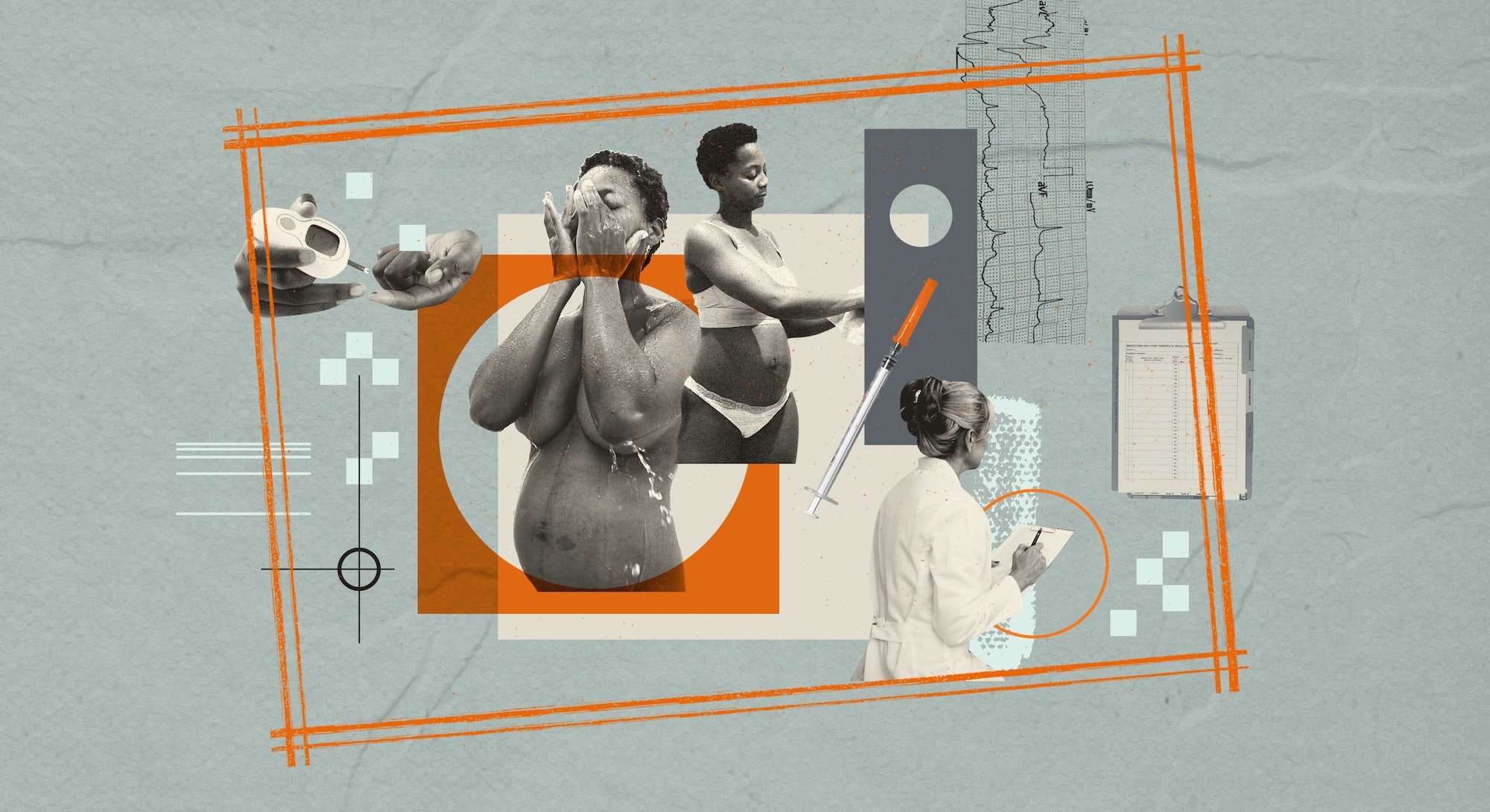 Is Diabetes Going To Crush My Dreams Of The Perfect Pregnancy?

T1D means any pregnancy of mine will be high-risk, but it’s still a risk I want to take.

At 23 years old, I was diagnosed with Type 1 diabetes. I checked into the hospital with my blood sugar north of 450 and my eyesight diminishing. It was short of a miracle, nurses kept saying, that I didn’t fall into a diabetic coma. Laying there on the lumpy ER bed, a truckload of new information was dumped inside my brain: Insulin. Counting carbohydrates. Blood work. More insulin. And the biggest bomb of them all: There’s no cure. I was going to have this chronic illness for the rest of my life.

Through sniffles and a trembling chin, I somehow managed to squeak out my most-pressing question to the doctor: “Will I still be able to have kids?”

“Of course you can still have kids,” the ER doctor delicately said to me. He was attempting to choose his words carefully. “It’s just... you’re going to be a high-risk pregnancy.”

What does that even mean?

On one hand, I felt a lot of relief: relief in finding an answer to my mysteriously sudden 30-pound weight loss, relief from having to pee every 30 mins on the dot, relief learning there wasn’t anything I did to earn this diagnosis; it’s hereditary. But on the other hand, there was fear and grief. A lot of it. Fear of the unknown. Fear of letting my body down. Fear of “What if I don’t prick my finger right?” or “Does that mean no more macaroni and cheese?” I grieved the previous care-free 22 years of life. I grieved a fully-functioning pancreas. And then the thing I grieved the most, my fantasies about pregnancy.

The four years since that fateful ER visit and diagnosis have been a rollercoaster. Since, I’ve had very high blood sugars, very low blood sugars, e-visits, tearful nights, countless pharmacy trips, and one too many “Well, at least it’s not cancer,” statements flung my way.

But now, newly engaged and my desire to start a family intensifies, I wanted to dig into that aforementioned question again, despite how much it scares me.

One Google search inquiry of “Type 1 diabetic and pregnancy” will sway you away from the world wide web forever. It’s not pretty. Dr. Alissa Erogbogbo, a medical director of operations at OB Hospitalist Group, cautions against search engines altogether. “It’s gloom and doom,” she warns. “It's what I call an ‘untouchable subject’ because it comes with so many high risk issues. And No. 1 being stillbirth. That's one that really doesn't digest well on both sides of the table for the physician or the patient. Neither one of us likes that.”

“Honestly, the reaction I got going into the doctor's office — being a Type 1 diabetic — a lot of people I spoke to felt like it was a bad idea. Like, ‘What is she doing?’” my cousin Tamara told me. She could feel it. “Then that’s when the fear kicked in.”

Me and my cousin Tamara were the “lucky ones” to be gifted Type 1 diabetes in the family. My uncle Gary, her dad, did not provide a gift receipt when he passed it on to us. She was first diagnosed at 25, four years after she’d already given birth to her first daughter, Amara.

She was the first person I wanted to talk to. When we talked over the phone, she was 39 weeks pregnant, waddling to her induction date to have her second daughter, Amia. But this pregnancy? It was a night and day difference, she said.

Tamara had sworn off having another baby post-diagnosis, she told me. She knew the risk factors were too high and didn’t want to chance it. But baby no. 2 was unplanned, and by the time she walked into her first appointment with a laundry list of questions, it hit her that maybe she was already behind the mark.

Growing up, random cravings featured prominently in my daydreams about pregnancy. I couldn’t wait to be pregnant so I could summon my significant other to McDonald’s at 3 a.m. to fetch me a large french fry and an Oreo McFlurry for dipping. Now that’s power, I thought.

“Am I going to pass it on? Well, it's too late now. Is the baby going to have a heart defect? It's too late,” the pace of her voice quickened as she relived the moment. “These questions that I didn't think concerned me just blindsided me.”

The same overwhelming shock that washed over Tamara that day in the OB-GYN office reminded her of her first endocrinology appointment as a T1D. So many things to learn and unlearn. But this time, it wasn’t only about controlling your own blood sugars; you had another person’s sugars to control too.

Lemma Brown, a mother of two and a registered dietitian, totally understands the dark cloud of “guilt and shame” that comes with T1D and pregnancy. After being diagnosed at 19 years old, Lemma admits to putting off the idea of starting a family because she was having a hard time reaching her goal A1C (a blood test that measures your average blood glucose levels over the past three months) before conception. She fiddled with her diabetes management and sought after resources but to little avail.

“I felt really lonely with my first pregnancy,” Lemma tells me. “I just felt like it was all on me. It’s all on me to manage myself but also manage the health of this growing baby. And I definitely had a hard time. My first pregnancy, I feel like things went well. My baby's health was well, my health was well, but I worked so hard. I remember thinking, ‘It shouldn't be like this.’ I was just drained. I know other women go through this; is it this hard for them?”

Lemma's social media is decorated with mythbusting reels and educational nutrition videos that encourage moms-to-be. She tells me that she first started working with T1D women because she felt like there were limited resources out there to help them feel good about their pregnancy. “Every time I looked up information, it was scary,” she told me, “I was just terrified every time.”

It's not just the life or death stuff that's scary either. Growing up, random cravings featured prominently in my daydreams about pregnancy. I couldn’t wait to be pregnant so I could summon my significant other to McDonald’s at 3 a.m. to fetch me a large french fry and an Oreo McFlurry for dipping. Now that’s power, I thought. But as a pregnant T1D, with a strict insulin-to-carb ratio and a daily target glucose range of about 65 and 140, are we allowed to have cravings?

“I really grieved...especially because none of my friends who were pregnant alongside me were diabetic. And so we just had such different experiences.”

“Cravings are definitely a thing and they're very intense. I feel like you shouldn't ignore them because you're eventually going to have whatever the food is,” Lemma advises, as long as you count for the adequate amount of insulin to cover it, of course. She also doesn’t have her clients stick to strict diet guidelines; she believes it's important to offer as many foods as possible because she knows pregnant people are dealing with food aversions or nausea, too.

*Please, a moment of silence for the graveyard of milkshakes I will not be able to consume as a pregnant woman. Thank you.*

Writer Hannah Matthews also mourned the stereotype of joyful, spontaneous eating while pregnant. “I really grieved,” she says. “Especially because none of my friends who were pregnant alongside me were diabetic. And so we just had such different experiences.”

The new mom from Portland, Maine, was diagnosed with T1D at 30 years old, four years before the birth of her son. She had a history with eating disorders, and with that mixed with her diabetes diagnosis, doctors expressed doubt in her being able to have a successful pregnancy.

She proved all the naysayers wrong, and Matthews — who also works in reproductive health care as an abortion doula — reframed the scary definition of “high-risk pregnancy.” But, she also understands her privilege.

“I am Type 1 diabetic, I'm white, I have good health insurance, I'm not in a bigger body, and I don't face a lot of the medical stigma and the racism and the barriers that so many diabetic Americans face,” Matthews says. “If you were diabetic and couldn't afford insulin or if you didn't have good health insurance, or if you couldn't miss work twice a week for an ultrasound... My pregnancy took everything I had. It really made me angry — I'm always angry about how diabetics have to survive in this country — but when I was pregnant, I really got angry.”

Physicians within the health care system are also aiming to bring awareness to the prejudices and stigmas that live within its walls. Race, class, socioeconomic status... and what type of diabetes you have, too.

Erogbogbo told me that when a T1D patient enters their office, they are also fearful of the unknown of this pregnancy journey ahead. Based on past experiences, she told me there are prejudices baked into the physician's mind. “And when it comes to Black and Brown moms, then it's even worse,” Erogbogbo adds, citing the statistics that already stack up against pregnant women of color. “They're just like, ‘Oh, my gosh, she shouldn't be in my office. I don't want her in my office. I'm really afraid to take care of her.’ We don't want there to be a bad outcome. It requires a cohort team of individuals to all understand what we're working with, what we're facing. How do we support this mom?”

And that’s the bottom line, Erogbogbo says. As a Type 1 diabetic, she insists on building an all-star team made up of a physician, nutritionist, nurse practitioner, and a maternal fetal medicine specialist to ensure you get the care you need.

“All of us as physicians, we all take that oath that we put our patients' care first, even if it's a ‘normal’ pregnancy,” Erogbogbo said. “There are plenty of physicians and nurse practitioners and health care providers that want to provide support, so that you can have a healthy outcome.”

If my body allows me to, I want to give it my best effort to bring a healthy baby into this world.

“So, after all this talking, do you still want to have children in the future?” my cousin, Tamara, asked me as our hourlong phone call came to a close.

I let out a deep sigh, the corners of my mouth curling upwards as I exhale. “Yes, I still do. Without a doubt.” Because motherhood is the best hood there is. I’ve been training for this since I was changing diapers on my Baby Born doll. My fiancé will make an amazing father, and if my body allows me to, I want to give it my best effort to bring a healthy baby into this world. That’s what Tamara, Hannah, and Lemma all said what kept them going.

“It is very weighty, and there's so much thinking involved at all times, but at the same time, it can also be beautiful and happy and really positive because it is awesome,” Lemma gushes. “What an amazing sense of accomplishment to deliver this baby into the world, even though your body doesn't necessarily function completely, but you can still produce and have this healthy pregnancy, and also a healthy child. It's really a huge sense of accomplishment... There's no greater superpower.”