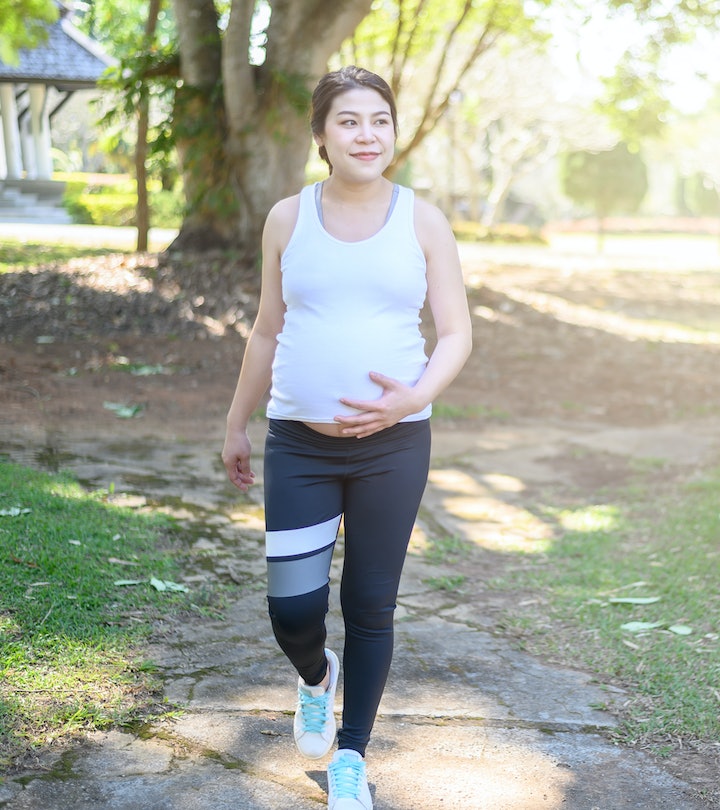 How Going For A Walk Can Help Control Your Gestational Diabetes

Just be sure to combine it with lots of fat and protein pairings with your carbs.

You’ve taken the first and now second gestational diabetes test. You’ve finally finished that terrible, terrible drink — whether it was fruit punch or flat orange Fanta-flavored — you chugged, you waited, you tried so hard not to barf. And now you’ve been diagnosed with gestational diabetes. But don’t panic yet. Having gestational diabetes isn’t the end of the world — and it doesn’t mean you can’t have a healthy pregnancy. Experts say it’s manageable and that even going for a walk can help control your gestational diabetes.

What is gestational diabetes?

After your result, and after speaking with your doctor, you may still have some questions about what gestational diabetes actually entails, especially if your mind was racing once you heard the diagnosis. Gestational diabetes is diabetes that only occurs when you’re pregnant. “Insulin resistance occurs during pregnancy due to the many hormonal changes,” says Dr. Sarah Twogood, an OB-GYN at Cedars Sinai Medical Group and Flo Medical Expert. “Insulin resistance means insulin does not work adequately, and since insulin lowers glucose — sugar levels in the body — this results in elevated levels of glucose.”

Does going for a walk help control gestational diabetes?

Twogood says yes, that walking definitely can help control your GD — honestly, any form of exercise can help control it because your body uses up glucose during exercise. “This helps lower glucose levels and that helps control diabetes,” she says. According to a study, pregnant women should aim to get at least 6,000 steps per day to help control the CGL levels. There were 73 women with GD tested in the study, and data was collected from 24 women. The estimated number of steps walked daily showed a positive correlation, the study noted.

For many with gestational diabetes, going for a walk after eating a meal has helped lower their blood sugars for their next reading (most doctors will ask you to test an hour or two hours after you eat). The American Diabetes Association noted that, while exercising, your insulin sensitivity is increased, so your muscle cells are better able to use any insulin in your body to take up glucose. There’s also the benefit of when your muscles contract during your walk, your cells can take up glucose and use it for energy, regardless of whether there’s insulin to use or not.

When and how long should you walk to control gestational diabetes?

Times can vary, but some experts recommend walking for anywhere between 20 to 40 minutes, roughly 30 minutes after a meal, or just staying active in some way through exercise or even doing something less strenuous, like nesting. (Hey, carrying all of those laundry baskets of baby clothes up and down the stairs is sure to burn up some glucose.) Midwife Ellen Armando tells Romper that a walk after every meal isn’t doable, but you should at least aim for a post-dinner walk, even if it’s just 15 minutes, to get your heart rate up and hopefully bring those numbers to where they should be for your post-meal check. (A walk at night can also improve your fasting numbers.)

According to Healthline, gestational diabetes, for the most part, can be managed with diet and exercise alone. You should try eating protein with every meal, including daily fruits and veggies in your diet, limiting or avoiding processed foods, and paying attention to portion sizes and carb counts. “In general, your diet should include protein plus the right mix of carbohydrates and fats. Too many carbohydrates can lead to spikes in your blood sugar,” the website noted. The CDC also recommends monitoring your blood sugar often, taking insulin if needed, and getting tested for diabetes after pregnancy. “Get tested for diabetes six to 12 weeks after your baby is born, and then every one to three years.For most women with gestational diabetes, the diabetes goes away soon after delivery. When it does not go away, the diabetes is called type 2 diabetes,” according to the CDC website.

How does gestational diabetes affect your baby?

“The control of the glucose numbers often affects how much gestational diabetes affects the baby,” Twogood says. “In general, risks for the baby with GD include being larger in size than they would have been otherwise — large for gestational age or macrosomia — an increased risk of heart problems, and neonatal issues such as respiratory problems and metabolic problems — such as being able to control their own glucose levels.” In longer terms, there’s an increased risk of glucose impairment themselves, she adds.

But rest assured, if your blood sugar numbers aren’t controlled with diet and exercise, your healthcare provider may recommend insulin to help keep those numbers down and keep baby safe.

If you haven’t taken your test yet and you’re curious, there are some risk factors to look out for when figuring out if you’re high-risk for gestational diabetes. Twogood says, “If you are in a prediabetic state or insulin resistant state before pregnancy, you have a family history of diabetes, you had gestational diabetes in a previous pregnancy, your pre-pregnancy BMI is greater than 30, or you’re older aged — especially 40+ — you’re at an increased risk.” However, even people without risk factors can be diagnosed with gestational diabetes, which is why doctors recommend universal screening.