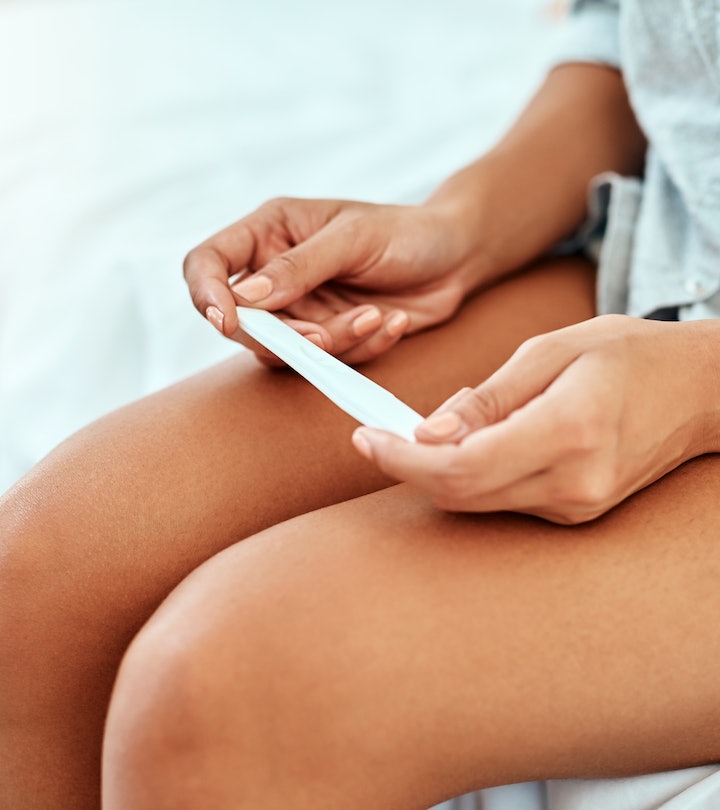 Everything You Need To Know About A Chemical Pregnancy

Although people may be more candid about the pregnancy experience now, there’s still a lot about the whole process that isn’t talked about all that often. For instance, what is a chemical pregnancy, and how is it different from a more typical conception? Four OB/GYNs break down everything you need to know about a chemical pregnancy, from the definition to symptoms to the impact they can have on those who experience them.

What is a chemical pregnancy?

“A chemical pregnancy is essentially a very early miscarriage that occurs after there is a positive pregnancy test but before a pregnancy can be detected on ultrasound,” as Dr. Ila Dayananda, Chief Clinical Operations Officer and Medical Director at Oula, explains to Romper in an email. “Typically, this means that the pregnancy spontaneously terminates before the 4-5 week timepoint.” Basically, it’s the loss of a pregnancy very soon after conception.

“We think of them as very early miscarriages shortly after fertilization and implantation of the embryo,” as Eduardo Hariton, OB/GYN and infertility specialist, MD/MBA at Harvard Medical School and Harvard Business School, tells Romper. “Since our pregnancy tests are more sensitive than they used to be, we are picking up more positive hCG tests that do not progress to pregnancies and end very early.” Thanks to tech, people who are trying to conceive, as well as their physicians, are more aware of chemical pregnancies now.

Why is it called a chemical pregnancy?

Causes of a chemical pregnancy

There are many reasons a chemical pregnancy may occur. “The most likely cause is that the embryo formed was not genetically perfect and couldn't develop properly,” as Mary Jane Minkin, MD/OB/GYN, Yale School of Medicine, tells Romper. “These are actually very common, and it indeed was with the advent of the very early detection of a chemical made by the developing placenta of the embryo called human chorionic gonadotropin, which led to us knowing that this had occurred.” Before modern, extremely sensitive pregnancy tests were around, many people would not have known a chemical pregnancy had even happened.

Symptoms of a chemical pregnancy

Generally, experiencing a chemical pregnancy may not produce many recognizable symptoms. “They often have no symptoms or can mimic the symptoms of a normal period with menstrual cramps and bleeding,” says Dr. Long. On the other hand, you may just feel a bit different during this time. “Often, pregnancy hormone (hCG) levels are not high enough prior to the miscarriage for a pregnant person to feel typical pregnancy symptoms (such as breast tenderness and nausea) – but they may feel different than their baseline, as every person is different when it comes to their sensitivity and response to hCG levels,” says Dr. Dayananda.

What else to know about chemical pregnancies?

“Chemical pregnancies are common. There are some estimates that they account for 50-75% of pregnancies,” says Dr. Long. But like many issues surrounding pregnancy loss, they simply aren’t often discussed very frequently. “Unfortunately, there isn’t much open discussion around chemical pregnancies or for that matter miscarriage in general – which is a true shame as it leads to stigma and lack of support during these situations,” says Dr. Dayananda, who calls on other OB/GYNs to help present the facts around miscarriage.

The emotional impact is very real

Allow yourself to feel the full emotional impact. “I wish that people knew that even though clinically they may not be considered the same as a 7 or 8 week miscarriage, our patients may feel the same sense of loss after the joy that is getting a positive pregnancy test,” says Dr. Hariton. Other doctors supported this idea completely. “People who have experienced miscarriage at any gestational age may have feelings of intense loss, grief, and anxiety about their fertility – especially when it comes to future pregnancy planning. Pregnancy, whatever the outcome, is a transformative experience,” says Dr. Dayananda. If necessary, talk to your doctor or counselor about healthy ways to process the feelings that a chemical pregnancy can bring up. They’re still a very real experience, and it’s important to acknowledge your feelings around this event.

More Like This
What Does Amniotic Fluid Smell Like? A Nurse Explains
Are You Leaking Amniotic Fluid Or Is It Normal Discharge? Experts Explain
How To Increase Your Sex Drive While Pregnant
Here's How To Keep Your C-Section Incision Dry