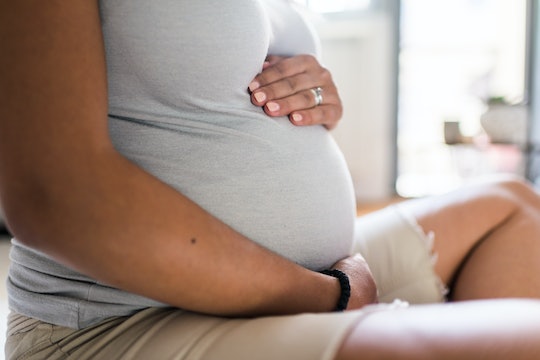 This Is The Deal With Your Mucus Plug & What It Does

Beyond its cringey name, the mucus plug has a very important function: it protects the cervical canal while you’re pregnant. But chances are as you get closer to having your baby, you’ll have some questions about the mucus plug and pregnancy, like what is it, when are you going to lose it, what happens after it’s lost (hint: it may regenerate). Read on for answers to your most pressing mucus plug questions, though I’m still trying to figure out who gave it that horrific name and why.

What is a mucus plug?

“The mucus plug is a mucus collection that keeps the cervical canal moist and protected. Secretions from the cervix collect and seal the canal with a thick plug of mucus which blocks the entryway to the uterus,” Dr. Lucky Sekhon, fertility specialist and board certified OB/GYN from NYC tells Romper. She adds that the mucus plugs looks like a clear, yellow, or brown blob of jelly. In some cases it may even be reddish or bloody, Kecia Gaither, MD, MPH, FACOG, double board-certified in OB/GYN and Maternal Fetal Medicine, Director of Perinatal Services at NYC Health + Hospitals/Lincoln tells Romper.

Simply put, the mucus plug protects the uterus from outside bacteria. “Functionally, one can think of it as a ‘cork,’ [a] barrier which along with the amniotic fluid protects the baby from the external world,” Gaither says. If the cork analogy ruins wine for you (apologies) you can also think of the mucus plug as a gatekeeper or a door that keeps out unwanted bacteria and germs.

Some of the time it will be obvious that you’ve lost your mucus plug (hello jelly blob in your underwear), but it could be missed, especially as some women pass their mucus plug in small pieces, and not all at the same time, Dr. Sekhon tells Romper.

Many people think that the mucus plug and the “bloody show” (again with the poor naming choices) are one in the same, but that’s not totally accurate. The two go hand-in-hand, and the bloody show typically follows the loss of the mucus plug, though it is not the mucus plug itself. Instead, the bloody show is “mucus from the cervix that is streaked with pinkish to brown blood. It is associated with dilating vessels in the cervix as it ripens and prepares for labor,” Dr. Sekhon says. She adds that any bright red or brisk bleeding should be investigated by your doctor as it could signal a more serious problem.

Is losing your mucus plug a sign of labor?

“Losing your mucus plug is not a definitive sign of labor but it does indicate that your cervix is softening or ripening,” Dr. Sekhon says. “If the mucus is accompanied by contractions or blood, you should call your doctor. The mucus plug can be lost weeks before, or right before the onset of labor.” Gaither adds that typically the loss of the mucus plug will indicate cervical dilation, which could mean labor is (somewhat) near, but no need to be frantically showering and packing a hospital bag because you’ll typically have some time before active labor begins. If you have intense regular contractions along with losing your mucus plug, or your water breaks, call your doctor.

Can you have sex after losing your mucus plug?

Just because you lost your mucus plug doesn’t mean you’ve lost your libido, especially when you consider that some people will lose it weeks or even months before going into labor. If you’re wondering if you can have sex after losing your mucus plug, the answer is likely yes but you will want to check in with your doctor if you’re in the final weeks of pregnancy as your cervix may be too dilated for sex.

Normally, “you can have sex after losing your mucus plug,” Dr. Sekhon tells Romper. “The cervix continues to make more protective mucus. Also the baby is enclosed in an amniotic sac - this protects the fetus from any contaminants or bacteria tracking up from the vaginal canal.”

One thing to keep in mind is that sex could trigger the loss of the mucus plug (so can coughing, sneezing, contractions, or just moving around). “As a woman is preparing for childbirth, her cervix begins to soften and dilate. As a result, the mucus plug can become dislodged,” Dr. Monica Grover, gynecologist at VSPOT Medi Spa, told Romper in a previous article. “This can also occur during intercourse due to the relaxation of the uterus after an orgasm, or the release of hormones such as oxytocin, or the release of prostaglandins.”

Can you lose your mucus plug more than once?

Some people may be concerned when they lose their mucus plug as early as 20-24 weeks, but rest assured that losing the mucus plug early is not associated with preterm labor, as Dr. Annelise Swigert, OB/GYN, told Romper in a previous article, though if you do suspect you lost it early, be sure to let your doctor know.

You could also lose the plug in smaller pieces, as Dr. Sekhon mentioned earlier, which could feel like you’re losing it more than once. If the whole thing does come out in the second or early part of the third trimester, it’s not a big deal. Your body is making more mucus as a normal part of pregnancy and there’s not just one finite mucus plug; it’s totally possible to lose a lot of mucus at one time (enough to constitute a ‘plug’), twice or even three or four times.