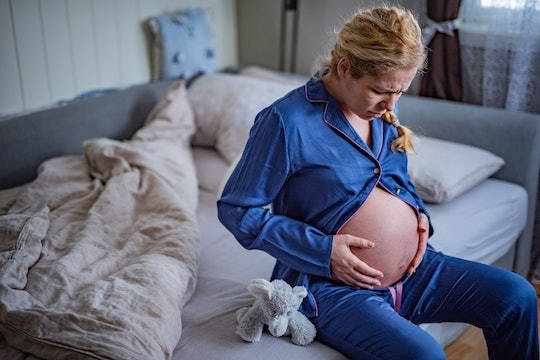 If Your Lightning Crotch Makes You Think Labor's Coming, Here's What You Need To Know

This aptly named feeling is a real thing.

One of the more unexpected experiences of pregnancy is the sensation known as lightning crotch, which is a sudden zap of pain in your pelvic region. So is lightning crotch a sign of labor? Experiencing such an out-of-the-blue zing of pain can make some moms (understandably) think that labor is near, especially when lightning crotch pelvic pain occurs near their due date.

“Lightning crotch is not a sign of labor. It is a normal part of pregnancy,” as Dr. Cyn, a board certified OB-GYN, tells Romper. The sharp but brief sensation of lightning crotch is different from labor pangs. “If you start to feel more intense crampy pain, not sharp and radiating, make sure to call your doc and start timing the cramps, because that may be a sign of early labor,” Dr. Nicole Williams, the head of the Gynecology Institute of Chicago, tells Romper.

Although experiencing lightning crotch itself is not a sign of early labor, there are many valid reasons why moms-to-be may assume it is. If it’s your first baby, you may think the zapping pain is the start of contractions. After all, if you’ve never felt a particular type of pain before, it’s kind of difficult to place it in context. Plus, feeling an intense pain in the pelvic area, especially when your due date is near, would make most anyone think twice about whether it’s delivery time. For the most part, however, it looks like lightning crotch is just a routine part of the pregnancy process for many people. It can start as early as week 12 of your pregnancy and may continue after pregnancy for a few weeks or months, but it isn’t going to last forever.

“Lightning crotch is sharp, intense pain in the vaginal area caused by nerve compression from the baby’s positioning,” Dr. Mary Jacobson (Dr. J), OB-GYN and Chief Medical Officer at Alpha, tells Romper. Dr. J also describes it as a type of pelvic girdle pain. “Lightning crotch is a phenomenon that usually occurs in the third trimester of pregnancy. The true cause is unknown. The thought is that as the baby grows and moves down the birth canal, they can [put] pressure on different nerve endings which can cause a sudden onset of pain,” says Dr. Cyn.

No one minces words about one thing, however: lightning crotch can hurt. “‘Lightning crotch’ is actually round ligament pain,” says Dr. Williams. “Round ligament pain usually feels like a sharp pain which radiates down toward your vagina, like lightning (hence the term).” Although it’s brief, typically only lasting for a few seconds, the effect can be startling. “Lightning crotch is like being sucker punched in the crotch. It can stop a woman in her tracks. The pain is usually sharp, burning, and/or tingling,” explains Dr. Cyn. (For more takes, here’s how 16 moms describe what lightning crotch feels like, with one mom saying it was “like my body was being zapped in half from the inside.” There are many comparisons to red-hot nails, irons, and even a cattle prod.)

How is lightning crotch different from labor pain?

There are a few differences between lightning crotch and labor pain that stand out. “Lightning crotch causes brief, intense, jolting pains in the vagina,” says Dr. J. It occurs at random. Actual contractions are felt more in the back or abdomen area, and they become more frequent, consistent, and intense over time, according to Romper. If you have any doubts about whether it’s lightning crotch or labor pains, though, don’t hesitate to reach out to your midwife or medical team for advice.

How to alleviate lightning crotch

There’s definitely a consensus that lightning crotch sucks, but is there anything moms can do to ease the pain? “The best thing to do is to get your feet up, take some pressure off your lower body. A warm compress to the back can also help, as well as a couple of acetaminophen,” says Dr. Williams. “Wearing a belly belt and compression stockings to help lighten the load on the pelvis” can provide relief as well, as can changing positions, says Dr. J, so sit down if you were standing, or get up if you were lying down.

Experiencing lightning crotch is a very real (and often very painful) part of the pregnancy process, but it’s distinct from labor pain. If you’re dealing with this shocking type of pain, though, remember that it won’t last forever, as much as lightning crotch during pregnancy can hurt during the moment.

Dr. Nicole Williams, the head of the Gynecology Institute of Chicago

This article was originally published on November 11, 2017