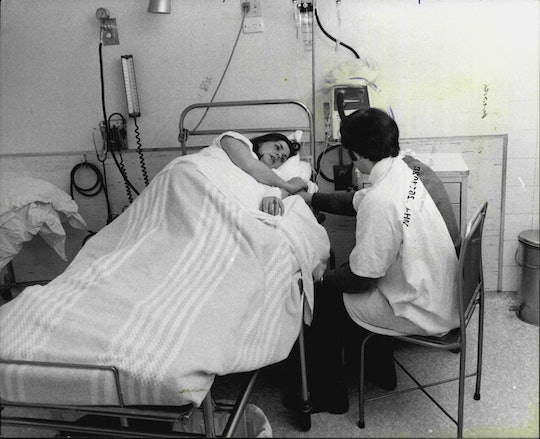 Thanks to birthing women throughout history, there are much safer pain management options for moms today.

For most parents, their baby’s birth is one of the most memorable days of their lives. But for women who gave birth in the early to mid-1900s, they may have no memory of that day at all thanks to twilight sleep. But what exactly is twilight sleep during birth, and is it still a thing? This birth method fell out of favor in the '60s and '70s, and, well, just be glad there are better options available today.

Twilight sleep was a mixture of two drugs that provided pain relief for women giving birth, but also erased their memory of the whole experience. It was invented in the early 1900s after Queen Victoria gave birth using ether, an early kind of anesthesia, and women everywhere started asking for pain-free childbirth.

By 1906, twilight sleep began in Germany, and wealthy women would travel there to give birth through the 1910s. In the U.S., the suffragette movement was in full force, so pain-free childbirth was a hot topic among other issues, like voting. American hospitals began developing labor and delivery units where they could provide pain medications during birth, but their version of twilight sleep wasn’t the easy-peasy birth experience women hoped for.

Nicole Sczekan, certified nurse-midwife and director of Midwifery at Brigham and Women’s Hospital, tells Romper in an interview that women in the U.S. didn’t have the same experience as those who went to Germany. Instead of changing the dosage for each person, doctors were just giving women all the same amount of medication.

“They gave a standard dose, which caused inhibition of the frontal cortex, your decision-making center, and women would become out of control, afraid, and lash out,” says Sczekan. “Women would be strapped down, put in straitjackets, or put in these ‘labor cribs.’ When it came time for the birth, they’d have to have a forceps delivery.”

“Moms oftentimes would not remember the birthing process at all,” says Dr. Greg T. Palleschi, division chief of Obstetric Anesthesia at North Shore University Hospital and Long Island Jewish Medical Center, in an interview with Romper. “Babies were also subject to the drugs given — morphine and scopolamine — and were often born sedated and needing resuscitation.”

“Women lost their dignity, their control, and they weren’t participating at all in the birth. By the late 1930s, it was hard to get an unanesthetized birth in a hospital,” says Sczekan.

The negative results of twilight sleep led to new innovations in childbirth. A 1942 book by Dr. Grantly Dick-Read promoted childbirth without tools or anesthesia, and a 1958 article in the Ladies’ Home Journal shared real nurses’ accounts of the scary side effects of twilight sleep. By the ‘70s, epidurals were the new form of pain control, and women had finally gotten hospital policies to allow their partner to stay in the room with them throughout labor and delivery.

“Epidural analgesia for labor became popular in the 1970s and ‘80s. It is, today, considered the gold standard in pain relief for labor,” says Palleschi.

There are so many pain control options available to birthing people today, so always ask your OB-GYN, midwife, or hospital about which methods are available to you. Sczekan says she talks to her patients about using mindfulness and relaxation techniques, movement, birthing balls, and tubs or showers, as well as their medication and epidural options.

“The other medications available are morphine, which we would only give in early labor because it can depress the baby’s respiratory system, but we also have synthetic narcotics that don’t affect the respiratory system of the baby. We also have nitrous oxide in many hospitals, and the woman administers that herself, and within a couple minutes it’s totally out of your system.”

How Women Fought For Change

Palleschi adds that women are monitored much more effectively today when they use pain management drugs than they were in the days of twilight sleep. Sczekan says it’s important that women advocate for what they want their birth experience to be like, because it has always been women who made changes in childbirth happen.

“Pain medication and the demand for change always comes from women. Creating maternity units was them trying to move birth into the hospital to make it safer. It was women who demanded men be allowed in the labor room. It was women who demanded to be allowed to have natural childbirth again, and now to have epidurals during labor,” she says. “The more choices women have, and the more education they have, the more empowered they are.”

More Like This
This Is How Your Water Breaks During A C-Section
Pitocin Induction: What It Is & The Play-By-Play
Everything You Need To Know About Colostrum Harvesting
Can Swimming Induce Labor? Experts Weigh In