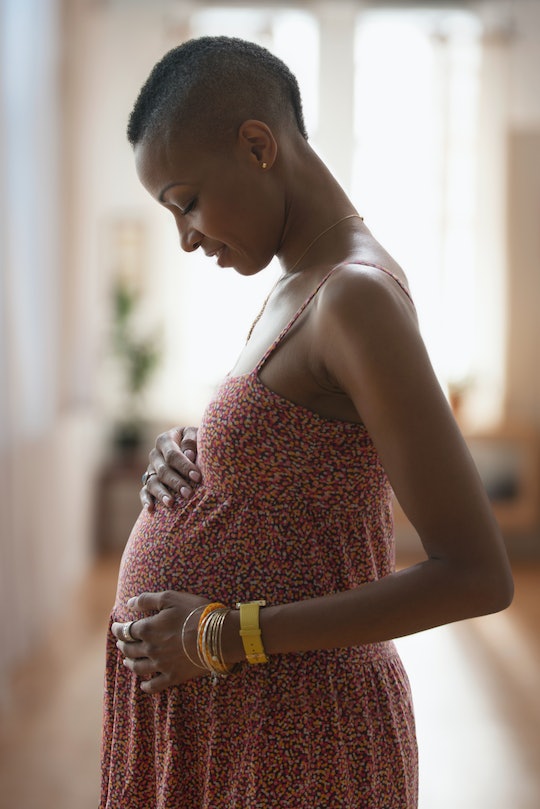 Because you'd like to get labor and delivery going already.

You may not know it, but your fetus is a fabulous gymnast. They’re able to perform incredible feats in such a confined space, including flipping, flopping, and tons of stretching. And not only can they twist and turn, but a baby in the womb can even do somersaults, too, which is kind of incredible if you think about it. But with all this moving and shaking, when does baby turn their head down — and stay put? Like most things in pregnancy, it depends.

Fetal movement during pregnancy is always a good thing. (Not so much for you, though, especially when your itty bitty acrobat is trying to stick their landing at 3:00 a.m.) But all those pokes and jabs, while sometimes eye-crossing, are a surefire sign that baby is growing both in size and length, a PubMed study found. In fact, your healthcare provider will often want you to count those kicks, particularly as your pregnancy progresses, to ensure that your fetus is just fine in there. “In the first and second trimester, a baby will experience many various positions,” Dr. Heather Skanes, MD, an OB/GYN in Birmingham, AL tells Romper. “These position changes will occur frequently and can include vertex, breech, transverse or oblique presentation.” Eventually, though, your little one should settle into a head-down position as they get ready for birth.

Why Does Baby Turn Their Head Down, Anyway?

After close to 40 weeks of pregnancy, you’re probably ready for your tenant to vacate the premises. But in order to do so, they’ll need to be head-first. But why? Well, it all comes down to Sir Isaac Newton’s law of gravity. “Your baby’s head is the heaviest part of the body, so even when the baby is turning and flipping, they can’t pick it up again,” ﻿Dr. Daniel Roshan, MD, FACOG, FACS, a leading board-certified OB/GYN and high-risk maternal-fetal specialist in New York City, tells Romper. “So when the baby turns head-down later in pregnancy, they’ll most likely stay down until delivery.”

So When Does Baby Turn Their Head Down?

When it comes to vaginal labor, a head-down, back-facing, chin-tucked-into-the-chest is the optimum position for labor and delivery, according to the Cleveland Clinic. While it doesn’t have to happen right away, it’s ideal if baby settles into their spot a few weeks before delivery, according to Dr. Skanes. “It is important for the position of the baby to be noted by 36-37 weeks as by this time the vast majority of babies who are going to be head down at birth are in that position,” says Dr. Skanes. It can happen earlier, though (Dr. Roshan notes that as early as 32 weeks of pregnancy is when some babies go head-down), but for the most part, the latter part of your third trimester is when your baby will turn head down.

It’s never a guarantee that babies will go head-down before delivery. For those who are not in perfect position, there are options. “If the baby is not head down at 37 weeks, the birthing person has three options,” Dr. Skanes explains. “They can seek out a provider who has the skills to proceed with a planned breech vaginal delivery, they can have a Cesarean section, or they can ask for an external cephalic version.” An external what? Basically, an external cephalic version (ECV) is when a midwife or obstetrician manual turns to the baby to head down position.

Thing is, just because your baby is in the breech (tushie first), transverse (Baby’s head is on one side of your body and the feet are at the other), or oblique position (Baby’s head is in your hip), doesn’t mean that you’re automatically a candidate for an ECV, though. “Most doctors have to carefully evaluate to see if the patient is a candidate for turning,” says Dr. Roshan. “If the baby is too big, the pelvis is too tight, or there are multiple loops of cord around the neck, or not enough fluid around the baby, it might not be possible.” A first-time pregnancy might also hinder your chances for being able to have a version. But even if your doctor gives you the green light, the baby still might not turn, since an ECV has about a 58% success rate, researchers found. It also doesn’t come without its risks as well. “While this procedure is considered safe and is recommended by the American College of Obstetricians and Gynecologist, it is not without risks,” advises Dr. Skanes. “These adverse outcomes are rare but include placental abruption, rupture of membranes, hemorrhage and stillbirth.”

If your baby isn’t head down yet (and you’re still a few weeks away from delivery), don’t worry. Some babies don’t turn until the last minute, so you might want to ask your provider for some tips to help expedite the process, like exercises that help open up the pelvis. Soon, your baby will be ready for labor and delivery — and that’s when the fun really begins.

More Like This
What You Need To Know About Eating Burrata During Pregnancy
Can You Do Zumba While Pregnant? Experts Weigh In
Can Swimming Induce Labor? Experts Weigh In
Pitocin Induction: What It Is & The Play-By-Play