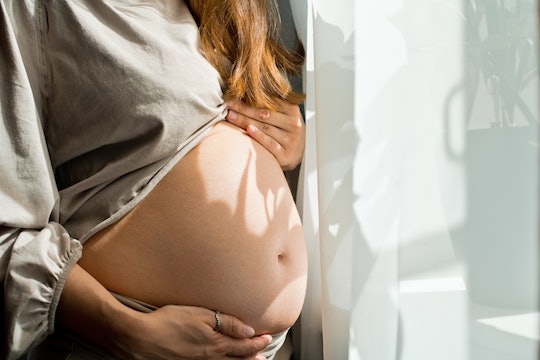 Here's When Your Belly Will "Pop" With Twins

My mom didn't know she was pregnant with twins until a week before we were born. Now that I'm a mom I find that shocking, because my mom started to show right away and her doctor put her on a diet because she was "gaining too much weight." Thankfully, prenatal care has changed a lot since then, and most twin moms will find out during a first trimester ultrasound. But when does your belly pop with twins? And if it occurs sooner than it does with singleton pregnancies, could that help moms-to-be know what to expect sooner rather than later?

Will You Gain Weight More Quickly With Twins?

People carrying twins are likely to gain weight more quickly than those carrying one fetus, according to the American College of Obstetricians and Gynecologists (ACOG). And while an ultrasound is the only surefire way to diagnose a twin pregnancy, per Stanford Health, greater than average weight gain and a larger than average uterus can both be early symptoms of multiples.

Will You Start Showing Sooner If You’re Pregnant With Twins?

To find out more about when you might expect to start showing with your twin pregnancy, Romper spoke with Dr. Chasity Jennings-Nunez, MD, an OB-GYN in Los Angeles, California affiliated with Adventist Health-White Memorial, and Emily A. DeFranco, DO, MS, Director of Maternal-Fetal Medicine and Vice-Chair of Obstetrics at the University of Cincinnati College of Medicine.

If you are pregnant with twins, you will probably start "showing" sooner than you would if you were pregnant with one fetus. "There is no standard number of weeks, but in general, yes, this will happen sooner with multiple gestations," Jennings-Nunez tells Romper. Your pregnancy showing depends on the position of your uterus, too, Jennings-Nunez says. "Until about 12 weeks in singleton pregnancies, the uterus is still below the level of the symphysis pubis and at 20 weeks usually at the level of the umbilicus."

The uterus grows larger to accommodate the number of fetuses present, DeFranco says, so "women who are pregnant with twins can expect to start showing sooner compared to those with a single baby." People who are pregnant with a single fetus typically start "showing" around 18-20 weeks of pregnancy, DeFranco tells Romper, "whereas those with twins would notice they show earlier around 14-15 weeks."

Twin mom of four Nicole DiChristofaro was right on track with this estimate. "My twin pregnancy was my second pregnancy," she tells Romper. "I was in maternity pants by about 11 weeks, my bump was noticeable at 14 weeks, and by 20 weeks, people were asking if I was 'ready to pop' yet."

What Factors Influence How Soon You’ll Show With Twins?

This was the case for Paula Copeland, a 34-year-old mom of five who started to show right away. "I think I began to show at about eight weeks, but I had had my daughter only a few months before, so it's difficult to remember where one pregnancy ended and the other began," she tells Romper. "The twins were my fourth pregnancy. I didn't show until my third, almost fourth month with my first, and early third month with my second and third babies."

Mom of three Cara Hiller also showed early with her twins. "I started showing to myself at about 11 weeks and showing to the general public at about 17 weeks," she says. "I was getting knowing looks around 12 weeks with my next baby."

And twin mom Amelia Platte had a different experience, entirely. "I didn't start to show until four months for the twins, but I started wearing a note on my work lanyard that read: Nov. 23, twin girls," she tells Romper. "My favorite comment in months 6-8 was, 'You’re huge! Are you having twins?' When I would say yes, they would say, 'You're really small for twins.'"

Emily A. DeFranco, DO, MS, Director of Maternal-Fetal Medicine and Vice-Chair of Obstetrics at the University of Cincinnati College of Medicine

More Like This
Are You Leaking Amniotic Fluid Or Is It Normal Discharge? Experts Explain
What Does Amniotic Fluid Smell Like? A Nurse Explains
The 16 Best Affordable Maternity PJs & Lingerie Sets On Amazon
20 Bridgerton-Inspired Baby Names

This article was originally published on Aug. 22, 2019