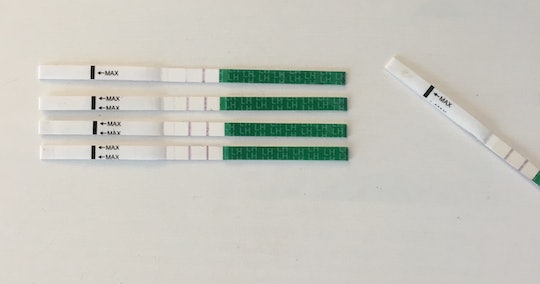 When Should An OPK Turn Negative After Ovulation?

Here's what you should know.

While going through the stressful process of trying to conceive (TTC), you may feel like your life revolves around peeing on sticks. And it does. I know many women — including myself — have to test for ovulation at least twice a day during our fertile windows just to be sure we don't miss it. And sometimes, we need a break from peeing on sticks, d*mn it. So when should an OPK turn negative after ovulation? When is it totally safe to stop testing and feel secure that you didn't miss your surge?

What Makes An OPK Turn Negative?

When you're taking an OPK, you're testing for a surge in the luteinizing (LH) hormone. According to Dr. Sherry Ross, OB-GYN and women’s health expert at Providence Saint John’s Health Center in Santa Monica, California, “This (LH) peak is five times the usual amount of LH in your urine. The presence of LH can be detected in much smaller amounts for days following the surge. The detection of very small or ‘faint’ amounts of LH may vary from person to person," which is why you may still be seeing a faint line after your positive ovulation test. “Once you have detected the LH surge, you and your partner should start having sexual intercourse daily for the next three days. It’s best to have sex around day nine or 10, and then abstain until you have a positive surge so the semen present is fresh and abundant,” Ross tells Romper in an email interview.

“The test for LH may never be completely negative, but it will appear as less concentrated or a ‘faint’ line on the ovulation test if checked after the peak ovulation,” Ross adds. So when should an OPK turn negative? Usually the day after you ovulate, but there will still be a very faint line, because LH is still in your bloodstream.

When is an OPK positive?

Remember, the OPK is only positive if the test line is as dark or darker than the control line. So when the test is lighter than the control line, it means it’s technically “negative.” Though some believe that when the test line is just about as dark as the control line, you should begin having intercourse to up the chances of conception — especially since sperm can last for at least three days in your uterus. Good luck, and happy testing. May the odds be ever in your favor. (And may you not run out of sticks to pee on.)

This article was originally published on Aug. 16, 2017