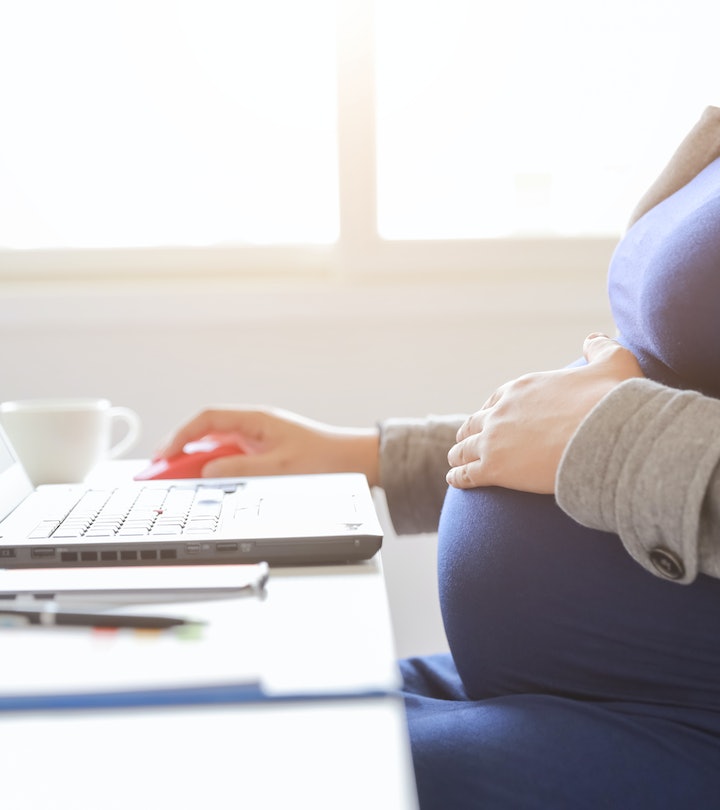 Here's When Experts Say You Should Tell Your Boss You're Pregnant

I remember a professor of Women’s Studies in my undergraduate years telling all the students “My G-d, if you get pregnant, don’t tell them until you’re showing at least, if you can get away with it.” I thought it was odd at the time, but never really thought about it again until I got pregnant. Was it actually good advice? How do you know when to tell your boss you’re pregnant?

How many of us have heard stories about parents who were let go from their jobs when they told their boss they were pregnant? Yes, it’s absolutely against the law to do so, but we all know that there are ways around this (negative evaluations, downsizing, grievance airing that just happen to line up with the time you announce your pregnancy). Unfortunately, this garbage has been happening for as long as women have been in the workforce. Famously, Senator Elizabeth Warren was fired from her position as a special education teacher when she disclosed her pregnancy, as The New York Times reported. It’s a genuine worry that many people who get pregnant have.

And even if you know that your job is safe, timing when to tell your boss you’re pregnant can be fraught with complexities you might not have considered. It might mean that you have to change your duties if you’re in a physical job. It may mean that office arrangements are going to need to shift. Let’s face it — it’s likely never going to be an easy thing to tell your boss, and you need to be prepared for a variety of reactions, whether they are positive or negative.

There are also the deeply-personal reasons for not wanting to share a pregnancy for those first few weeks when the risk of miscarriage is the highest. As someone who has experienced multiple miscarriages, I know the fine line we tiptoe as we decide when we think it’s “safe.” That date is often a moving target as scans are completed and blood is drawn.

It turns out that legally there is no set time when you should tell your employer that you’re pregnant, says Kelly DuFord Williams, founder and managing partner at Slate Law Group. Instead, she tells Romper that at least “for planning purposes you will probably want to give them enough advance notice so that you know when and how maternity leave will work, and so you can figure out how to add your child to your insurance policy.”

She understands that “many women are concerned about backlash,” but from a legal standpoint, you are on solid ground. “Your employer can't ask and you don't have to tell them until you are ready.” But we all know that what your company’s HR thinks you should do and what you’re legally required to do are two different things. It’s critically important to know that whatever you choose is protected by the law. And by all means, if you are experiencing issues, or if you’re worried about retaliation, what you choose to disclose, and when you choose to do it are valid, protected choices. Knowing the company culture, and speaking to other people who have gone through it is one way to help determine what your situation might look like.

In an ideal world, to keep everything running smoothly, and all parties satisfied with how things move forward, you might consider telling your boss at the end of your first trimester, or at the beginning of your second, HR and employment professional Marissa Letendre of My Resume Seed tells Romper.

She says that “it's important to ensure you tell your boss before you tell your coworkers so he/she isn't finding out from other people. If your coworker(s) are close friends of yours and someone that you'd normally tell early on, you should ask them to keep it confidential until you've had the chance to discuss with your leader.” Telling them earlier makes things easier when you have to take extra time for doctor’s appointments, or if complications arise and you need to be out of the office.

How to begin, though? Preparing for the conversation is almost as important as the timing of the conversation, according to Letendre. “Go into the conversation as you would any other and let them know that you are pregnant, your expected due date, and the date you anticipate you're going to work through.” If possible, Letendre says to “express your confidence in your ability to carry on with your duties and a suggestion for covering your tasks when you go out on maternity leave.” She says that “this shows your boss that you're looking out for both your own interests and the company's interests as well.”

If you’re in a job where you will likely need to train someone to replace you for the time you’re out, create a plan for how to do that, and explain it to your supervisor. Letendre says that “it would also be good to ask them to keep you informed if there's anything they need before you go out on leave to help accommodate the company's needs. This will balance both your needs and theirs.” But don’t expect them to know right away — they need to plan just as you do. Just make sure you continue to follow-up as time goes by. And “always ask for help if you need it. If accommodations are needed, reach out to HR and they should be able to support your needs,” urges Letendre.