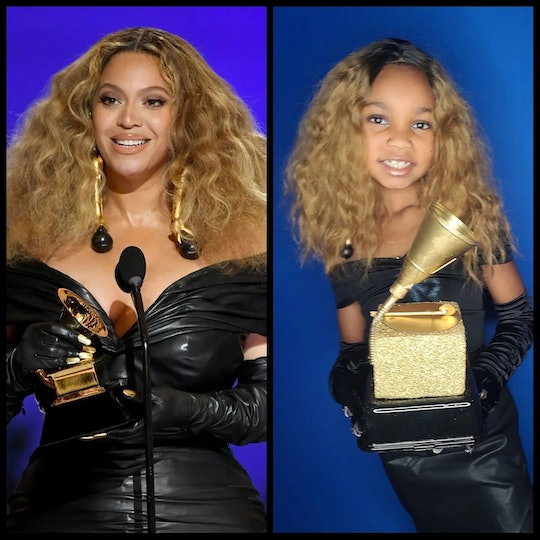 A Florida 7-year-old channeled her inner Beyhive for Halloween this year. Zya Marie not only dressed as Beyoncé but represented one of the singer’s most iconic and historic moments, the night she made history for having won the most Grammys by any male or female singer.

Zya nailed the look down to her blond highlights and shimmering gold nails to her award-winning acceptance smile. Zya’s mom, Shonda Knight, tells Romper, it was her daughter’s idea and she helped it come to fruition. “I made the earrings, trophy, and top,” Knight says. “She already had the skirt and I already had the gloves.”

Knight, who is an executive director of community and media relations for the Leon County Sheriff’s Office in Tallahassee, showed off her creative skills as the designer for her daughter’s look. The earrings were actually made with flex rods, hair beads, and a pair of $1 earrings. In fact, the materials for the Grammy replica all came from the Dollar Tree store. “The black part is a sandwich box I spray painted,” Knight says. “The gold is a foam square and the horn is the base of a balloon stick holder.”

The seven pictures posted on her Instagram, that’s managed by mom, even have her own signature hashtag, #zeyonce.

“WOW twinzies,” one person commented. Another wrote, “I had the pleasure of being in ‘Zeyonce’ presence tonight. She's sooooo sweet and giving....it was candy for everyone!”

Knight says Zya has been a Beyhive fan for as long as she can remember. Her favorite Beyoncé songs are “Run the World (Girls)” and “Before I Let Go.”

This is not the first time Zya has dressed up as one of her favorite celebrities. When she was three-years-old, Zya channeled her inner “Rhythm Nation” as Janet Jackson. And in March, she nailed former First Lady Michelle Obama’s look at President Joe Biden’s inauguration ceremony. And for Halloween last year, Zya was a Barbie girl.

Knight says one of her favorite parts about being a girl mom is playing dress-up and building self-confidence is always an important factor. “I want her to know that with hard work and God, she can be whatever she wants to be,” Knight says. “I'd like to say I've worked to instill kindness as well but she is naturally a very thoughtful person and really cares about others.”

No word on whether Beyoncé has caught word of one of her smallest fans, but needless to say, Zya is in the right direction to get her attention! We’re manifesting an Ivy Park Kids booking for her!