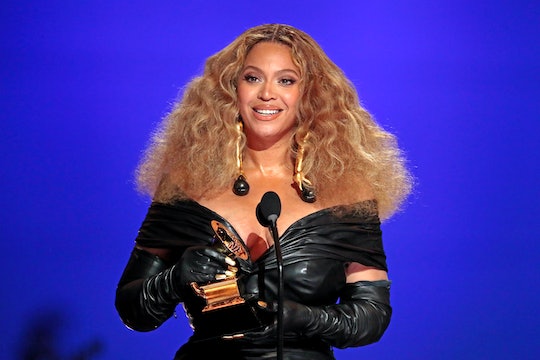 “Blue, congratulations! She won a Grammy tonight. I’m so proud of you and I’m so honored to be your mommy.”

The biggest night in music belonged to Mrs. Carter and Little Miss Carter. Records were broken and history was made by both Beyoncé and her daughter Blue Ivy at the Grammy on Sunday night.

Starting with Queen Bey, who went into the Grammys with a whopping nine nominations, the 39-year-old superstar now holds 28 Grammys awards to her name. By the end of the night, Beyoncé made history for having won the most Grammys by any male or female singer, as Rolling Stone reported. Multitalented artist and producing legend Quincy Jones is the only other living artist with as many Grammys as Beyoncé, according to CNN. Now, the “Black Parade” singer is only behind the late conductor Georg Solti, who had 31 Grammy wins, according to the Associated Press.

Beyoncé’s winning streak on Sunday included a win for “Brown Skin Girl” in the Best Music Video category with her daughter Blue, who also had a historic night. The 9-year-old won her first Grammy award for her intro part to the song, which was announced hours before the televised ceremony. “Blue, congratulations! She won a Grammy tonight,” Beyoncé congratulated her daughter during her acceptance speech. “I’m so proud of you and I’m so honored to be your mommy. All of your mommys, ya’ll are my babies and I’m so proud of ya’ll.”

Blue Ivy is the second youngest artist to win a Grammy, behind Leah Peasall, who won a Grammy for her contribution to the O Brother, Where Art Thou? soundtrack in 2001, when she was 8 years old, according to TODAY.

“Brown Skin Girl” was originally featured on the soundtrack for Disney's live-action 2019 remake of The Lion King. The music video was later made for Beyoncé 2020 visual album, Black Is King, which featured Blue and her twin brother and sister, Rumi and Sir.

“As an artist, I believe it’s my job, and all of our jobs, to reflect time and it’s been such a difficult time,” Beyoncé said during her acceptance speech for best R&B performance for “Black Parade.” “I wanted to uplift, encourage and celebrate all of the beautiful Black queens and kings that continue to inspire me and inspire the whole world.”