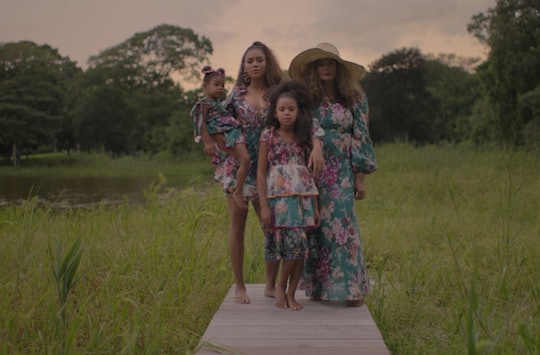 We don't often get to see a glimpse of Beyoncé's twins and her daughter Blue Ivy, but all three — yes, all three Carter children — make the sweetest cameos in Black Is King, Queen Bey's brand new visual album based on The Lion King that just premiered on Disney+.

Beyoncé's new special on Disney+ provides visuals to her 2019 album The Lion King: The Gift while retelling the story of The Lion King. It's a gorgeous tribute to music, art, Black culture, and Beyoncé's amazing mind. Black Is King is also a family affair with Beyoncé's closest friends and loved ones making some small but important appearances throughout. Beyoncé's husband JAY-Z, for instance, shows up 25 minutes into the special, rapping during the song "Mood 4 Eva" and occasionally interacts with his wife.

The couple's oldest daughter, 8-year-old Blue Ivy Carter, also makes a few appearances alongside her mom. Of course, Blue Ivy is no stranger to being in front of the camera, but she definitely gets her chance to shine in Black Is King. For example, she steals the show during the song "Brown Skin Girl."

Beyoncé also included a hand-drawn portrait of her kids on the wall in one scene, which is a sweet and subtle nod to her life as a mom.

While Beyoncé and JAY-Z's son Sir does not get as much screen time in Black Is King as his siblings, Beyoncé devoted the entire special just to him. At the end, Beyoncé shares a photo of Sir followed by the sweetest words.

"Dedicated to my son, Sir Carter," Beyoncé wrote. "And to all our sons and daughters, the sun and the moon bow for you. You are the keys to the kingdom."

Beyoncé and JAY-Z have largely kept Rumi and Sir out of the spotlight, so glimpses of them like these are truly special. You can see all of them in Black Is King streaming now on Disney+.