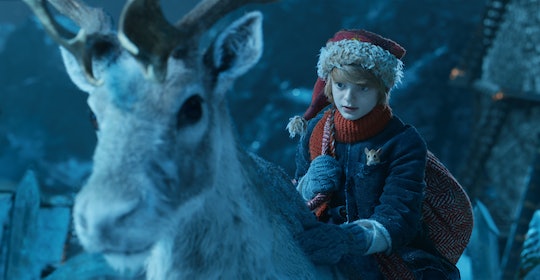 Who doesn’t want to see Santa Claus as a kid?

A Boy Called Christmas is based on a book.

A Boy Called Christmas is based on the 2015 children’s book of the same name written by Matt Haig and illustrated by Chris Mould. The book and upcoming movie tell the story of a sweet 11-year-old boy named Nikolaus, who lives in a time before Christmas is a thing. In the movie version of A Boy Called Christmas, the Netflix synopsis notes that an “ordinary young boy called Nikolas sets out on an extraordinary adventure into the snowy north in search of his father who is on a quest to discover the fabled village of the elves, Elfhelm. Taking with him a headstrong reindeer called Blitzen and a loyal pet mouse, Nikolas soon meets his destiny in this magical, comic and endearing story that proves nothing is impossible.”

A Boy Called Christmas is a magical film for the holidays.

There’s something gentle and comforting about A Boy Called Christmas. Perhaps it’s Maggie Smith trudging through a beautiful snowy street to tell the story of Nikolaus to two children, or perhaps it’s the world of young Nikolaus (played by newcomer Henry Lawfull) that lends itself to feeling like a warm hug on a cold morning.

“Long ago, nobody knew about Christmas,” Smith explained in the original trailer as we see Nikolaus and his mouse getting into adventures with all sorts of snowy creatures. “Until a boy showed the world how to believe in the impossible.”

Nikolaus, of course, is only at the beginning of his life-long adventure.

What age is A Boy Called Christmas appropriate for?

A Boy Called Christmas is rated PG for scenes of peril, and Common Sense Media recommends the movie as a “warm, festive, family adventure” that will probably be best for kids over the age of 8 due to some scary scenes and a parental death.

More Like This
The Best Valentine’s Day TV Episodes For Kids
72 Hilarious Valentine's Day Jokes For Kids
Exclusive: Watch How A Group Of Princesses Save The Day In Netflix's New Animated Series
'Women Talking' Is A Powerful New Movie Based On A Book
What Parents Are Talking About — Delivered Straight To Your Inbox

This article was originally published on November 2, 2021