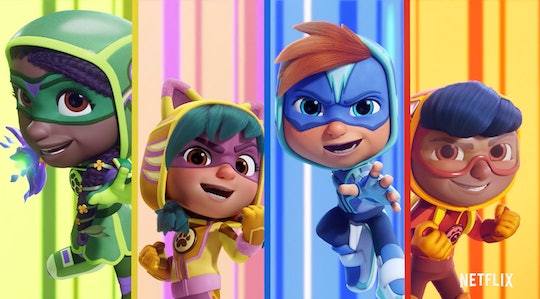 Your kiddo is about to have a new favorite superhero and it’s probably going to be Wren who’s learning to speak “chicken.”

There’s a problem a lot of parents of young children face: their preschooler loves superheroes... but superhero movies, shows, and comic books aren’t necessarily pre-schooler friendly. Big action movies can be too violent, too adult, and too scary, as can the various villains who cross the heroes’ path. Enter Action Pack, a new superhero Netflix series for preschoolers! And ahead of its premiere in January, Romper has an exclusive first look at the trailer.

Animated by ICON Creative Studios, Action Pack follows the adventures of the Action Pack (bet you never saw that coming), a group of four bold, brave, and heroic kids who use their unique superpowers to stand up to the (not-too-scary) bad guys of Hope Springs. Mr. Ernesto, their mentor and teacher at the Action Academy, helps them realize their ultimate mission of bringing out the good in everything and everyone... even in villains!

Each member of the team has their own unique personality and super powers that viewers can relate — and look up — to. Kind and assertive leader Treena has the power to control flowers and plants. Soft-spoken Clay has “plasma power” and invisibility. Shape-shifting, offbeat Wren (who is learning to speak chicken) can turn into all kinds of different animals. And energetic, over-eager Watts has the power to control electricity.

In the new trailer, you’ll meet the team, get a look at some of their fiercest foes (see: not too scary!) and see what’s in store in Hope Springs.

Action Pack is the latest series in Netflix’s growing roster of preschool programming, joining other titles like Ridley Jones and Ada Twist, Scientist and will be available to stream in January 2022.