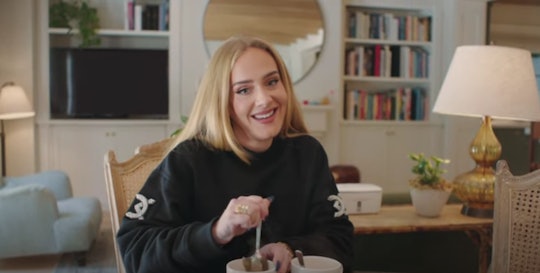 So much so he’d “kick around” in the womb.

There is no question that Adele is a gifted singer. Who wouldn’t jump at the chance to an all-access pass, private concert from one of the most sought after performers on the planet? Her unborn son, apparently. During a recent video for Vogue’s rapid-fire questions series, Adele revealed the one song she recorded when she was pregnant with 8-year-old son Angelo and let’s just say his early reviews of her performance were... unnecessarily harsh.

Adele and her ex-husband Simon Konecki welcomed son Angelo in October 2012, not long after the singer recorded the theme song for the James Bond movie Skyfall. While her performance of the titular song earned her a tenth Grammy, unborn baby Angelo was not a fan of every element of the song.

“I was heavily pregnant actually when I did the vocals for Skyfall,” Adele explained in a video interview for Vogue. “So, it was the only song that I recorded while I was pregnant with [my son] so my voice was a lot lower and he also hated it when I was singing the high notes. He’d kick around inside of me.”

Maybe it sounded different inside the womb, but the rest of the world really loved it, Angelo.

The singer’s new album 30, which is set to drop on Nov. 19, should hit a little differently for her son. First of all, he’ll be 9 years old and living outside the womb so it will probably sound different. But perhaps also young Angelo might be more invested in his mom’s new album because it was written for him. A special album to listen to when he grows up as a way to explain his parents’ divorce. “I just felt like I wanted to explain to him, through this record, when he's in his 20s or 30s, who I am and why I voluntarily chose to dismantle his entire life in the pursuit of my own happiness,” Adele told Vogue. “It made him really unhappy sometimes. And that's a real wound for me that I don't know if I'll ever be able to heal.”

Adele’s new album is her “most personal yet,” she told Vogue, and perhaps that level of personal investment will make a fan out of her son Angelo. Especially now that he’s out of the womb.