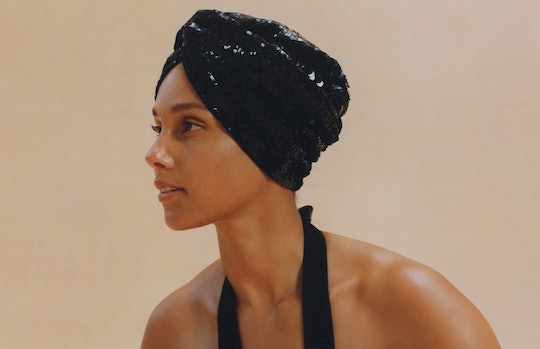 “Being a mother is definitely the reason I came into myself.”

The name “Alicia Keys” immediately calls several descriptors to mind. Musician. Artist. Feminist. Writer. Activist. Mother. The descriptor of mother is one that Keys takes seriously. In a new interview with Bustle, the singer offered some sage words of wisdom in looking at motherhood as an act of self-care rather than self-obliteration. A way to finesse your priorities and expend your energy on what is meaningful and important.

It all started when her son Egypt, now 10, was born in 2010. “Motherhood was the first time that I recognized, ‘Wow, there’s so many things people want from you that I’m not willing to give anymore because it’s not important enough,” the author of the new memoir More Myself: A Journey told Bustle. “I didn’t know how to do that before. I never knew how to say no.”

For Keys, who shares Egypt and 6-year-old son Genesis with husband Swizz Beatz, welcoming her first child changed all of that. “Through him, I learned enough love for myself to say, ‘You know, this person is no good for me,’ or ‘This relationship that used to work isn’t working anymore,’ or ‘That way I used to say yes to traveling a million miles across a million oceans to get to this one place for one hour and then turn around and come back? It’s just not the best idea,’” the mother of two told Bustle. “Being a mother is definitely the reason I came into myself. I know for sure that prior to it, I still didn’t know myself. I still didn’t understand my own worth and importance.”

Alicia Keys found a way to prioritize self-care during motherhood.

In 2019, the multi-talented artist also told Harper’s Bazaar that motherhood gave her “a stronger sense of clarity.” She added, “I used to be less aware of how I wanted to spend my time and more influenced by other people. After I had my kids, I felt like I had found my North Star. I was less wasteful; I worked more effectively.”

Being a mother has done more than help her find a balance in her priorities. Keys, who has adopted a makeup-free lifestyle, credits motherhood with encouraging her to honor her own space and time. “It’s all about this honoring of oneself as part of one’s environment: of one’s family, of one’s mother, of one’s children, of the Earth, of the planet, of the frogs… all the things,” she told Bustle. “It’s good to be able to care for things in that capacity. Everything matters.”

Taking time for yourself also matters. And Keys, who recently launched a new skin care line called Soulcare, had a little advice for moms when it comes to carving out time for themselves and their skin care routine. “These offerings give you moments to fill yourself up. It’s such a simple thing, to say what you need, but it’s so big,” Keys told Bustle. “When I’m able to [do that], I feel more beautiful, more powerful, and more possible.”