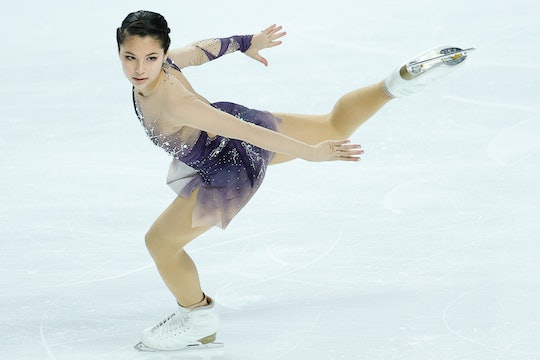 Alysa Liu Is Known As The "Simone Biles Of Figure Skating"

The 16-year-old Olympian is set to make an epic legacy on the ice at the 2022 Winter Games.

Team USA figure skater Alysa Liu is carving an epic legacy on the ice as she prepares to make her Olympic debut at Beijing’s 2022 Winter Games. At the tender age of 13, Liu became the youngest woman to win a U.S. Championship title and the youngest figure skater in U.S. history to land three triple axels in a single competition and win back-to-back titles in 2019 and 2020. Those honors, among others, have earned her the nickname, the “Simone Biles of figure skating.” But how did Liu, now 16, get here? With a supportive father, siblings, and family by her side.

Recently Liu tested positive for Covid-19 and was forced to withdraw from the U.S. Figure Skating Championships. Liu had no symptoms and has since recovered. She petitioned to make the Olympic team and on Jan. 31, when the U.S. figure skating Olympic team was announced, Liu’s name was one of them.

If she places first, she will be the first U.S. woman to win gold since Sarah Elizabeth Hughes in 2002. Rooting for her will be family, which includes her father and four younger siblings.

She Is The Oldest Of 5 Siblings

Liu, 16 years old, is the oldest of five siblings; her sister, Selina, and triplets, Julia, Joshua, and Justin.

Her Dad Welcomed All Of His Children By IVF

Mr. Liu had Alysa and her siblings by in vitro fertilization, or IVF, with two different egg donors and two different surrogates, as reported by Sports Illustrated. According to the magazine, her father wanted a big family like his own in China (he had six siblings) and went on a search for an egg donor. The expensive process forced him and his kids to live in a tight one-bedroom apartment for almost three years. Both of Liu’s donors were white women in hopes that his children would “benefit from a diverse gene pool,” according to Sports Illustrated.

Liu is the only one who has a different egg donor and surrogate and jokingly called herself a “loner.” She told Sports Illustrated that she started noticing genetic differences between herself and the woman she was raised to call mom when she was 8. “That’s how I figured out she wasn’t my real mom,” the Chinese-American teen told the magazine, “because she was Asian and I did not look Asian.”

She Has A Loving Mother Figure

Nonetheless, she has someone to call mom. Yan Qingxin, better known as Mary, is her father’s ex-wife and the kids’ legal guardian.

Her Dad Introduced Her To Figure Skating

Inspired by the accomplishments of two-time Olympic figure skater Michelle Kwan, Liu introduced his daughter to the ice when she was 5 years old. He is considered the “full-fledged skating dad” and is reportedly known to create a checklist for his daughter whenever she practices.

When she won the championship in 2019, Liu gave her gold medal to her father. “He just helps me so much,” Liu told NBC Sports in the 2019 interview. “He brings me to the rink every day. I think he puts in a lot of effort and deserves it.”

While it’s safe to say that Liu’s father is her biggest fan, Olympic fans are seeing some similarities in Liu’s incredible talents. Specifically, she’s been referred to as a the “Simone Biles of figure skating.”

“That's like a really big honor because I love Simone Biles a lot!” the 16-year-old told TODAY Parents. Although, she is secure in knowing she has no one else’s standards to look up to but herself. As she put it in the same interview, “I’ve been focusing more on myself rather than living up to other people’s expectations.”

More Like This
Jennifer Lopez Is Being Praised After Introducing Her Child With Gender Neutral Pronouns
Kim Kardashian Didn't Introduce Pete Davidson To Her Kids Until 6 Months Into Dating
'Clueless' Is, Like, Totally Still A Good Teen Movie In 2022
Catherine Reitman Calls It Like She Sees It: “Being A Working Mother Is Impossible”