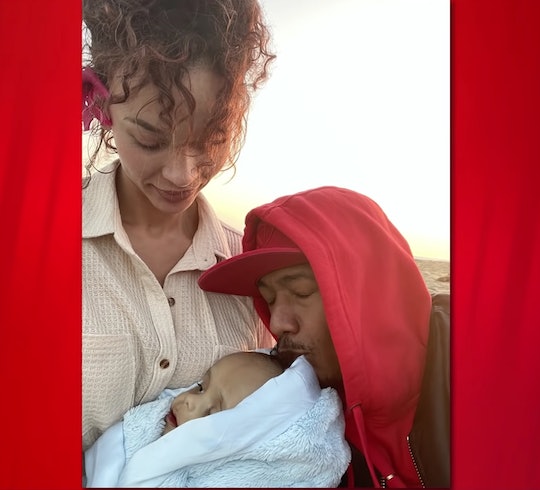 “It has been an honor and privilege being your mommy. I will love you for eternity.”

Alyssa Scott has opened up about the “unbearable” grief she feels following the recent death of her and Nick Cannon’s 5-month-old son Zen in a heartbreaking tribute to the late infant. The model posted a series of video clips she’d captured of Zen to Instagram late Wednesday while sharing a heartfelt message she’d written for her son.

“Oh, my sweet Zen. The soreness I felt in my arm from holding you is slowly fading away,” Scott wrote. “It’s a painful reminder that you are no longer here.”

A visibly emotional Cannon announced Zen’s death during Tuesday’s episode of The Nick Cannon Show. According to Cannon, Zen had been diagnosed with hydrocephalus, a condition where fluid builds up in cavities deep within the brain, effectively putting pressure on the brain which can lead to brain damage. Despite having had surgery to implant a shunt that could drain the fluid, Cannon said Zen’s health appeared to worsen around Thanksgiving.

In the tribute she shared on Instagram, Scott revealed she was struggling to accept her son was really gone. “I caught myself looking in the backseat as I was driving only to see the mirror no longer reflecting your perfect face back at me,” she wrote. “When I close a door too loudly I hold my breath and wince knowing a soft cry will shortly follow. It doesn’t come. The silence is deafening.”

Scott and Cannon welcomed Zen, their first child together, on June 23. A series of video clips Scott shared on Instagram gave viewers a brief glance into Zen’s tragically short life. In one clip, Scott’s daughter from a previous relationship shares a picture book with the infant. In another, Zen reclines on Scott’s legs in a bathtub, a happy smile on his face. Other clips showed Zen in the hospital. In the final clip, Scott can be seen gazing down at Zen as she rocks him in her arms on the beach.

“These last 5 months we have been in this race together,” Scott wrote to Zen on Instagram. “You kept me going. It would be the middle of the night and you would smile at me. A surge of energy would fill my body and pure joy would radiate from within me.”

“We were a team, both determined to see it through,” she added. “It feels unbearable running without you now. I can’t.”

Cannon described Scott as “the strongest woman I’ve ever seen” when announcing Zen’s passing on Tuesday and sharing some of what the two of them had been through in Zen’s final days. “Zen's mom, Alyssa, was just the strongest woman I've ever seen,” Cannon said. “Never had an argument, never was angry. Was emotional when she needed to be, but always the best mom, and continues to be the best mom.”

On Instagram, Scott said she felt herself being “carried” through her grief by her daughter, God, and by “complete strangers encouraging me to not give up.”

“It has been an honor and privilege being your mommy,” she wrote. “I will love you for eternity.”