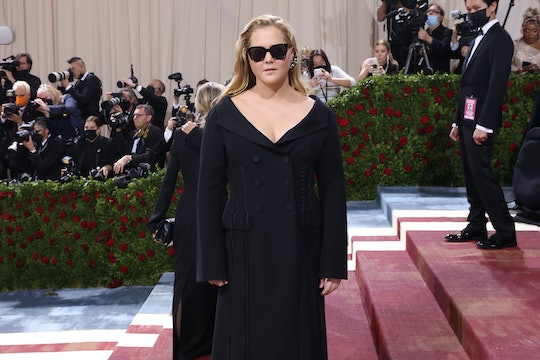 And so did her Spanx.

Amy Schumer was back at the Met Gala for the first time since 2017. And a lot has changed for the comedian since her first appearance five years ago. Like the fact that she’s given birth via C-section, for instance, which has changed her whole look for one of the biggest nights in fashion. Arriving in a long black tuxedo dress coat and sunglasses, Schumer gave her C-section scar, covered fashionably in Spanx, an honorable mention on the red carpet. Because she’s all about prioritizing honesty over glamor.

Schumer attended the 2022 Metropolitan Museum of Arts Costume Institute’s Gala on Monday, which featured the theme “Gilded Glamor and White Tie” paying homage to the industrial period in America from the 1870 to 1890. She arrived wearing a custom made dress coat by Gabriela Hearst, sunglasses, strappy black heels, and apparently some Spanx under the whole concoction.

“Everybody's always at home [asking] 'What is Amy going to wear this year?' They're on the edge of their seats,” Schumer told La La Anthony on the red carpet, per People. "When Gabriela Hearst says she's going to dress you, you put your Spanx on, right over your C-section scar and you get on that carpet, am I right? Am I right?”

Spoken like a mom with a toddler, in her case nearly 3-year-old son Gene. A mom covering her C-section scar with a layer of Spanx and needing a cocktail as a reward for getting dressed up for the evening.

Schumer had a difficult C-section when she welcomed her son Gene in 2019. “I was throwing up through the first hour of my C-section. It’s supposed to take about an hour and a half — mine took over three hours because of my endometriosis, and that was really scary,” she shared on an episode of the Informed Pregnancy and Parenting podcast at the time.

Three years later, Schumer is happy and healthy and covering up that C-section scar with a little Spanx at the Met Gala. How life changes.