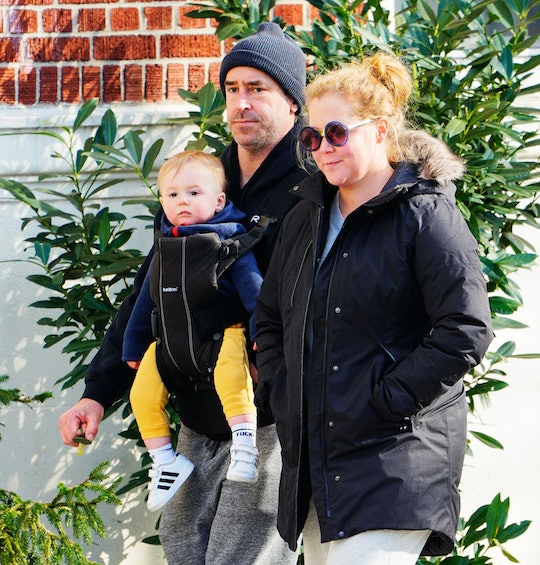 “happy birthday little geenie panini we love you as much as you love school busses.”

After becoming a mom in 2019, Amy Schumer has consistently shared the cutest photos of her son Gene. Between hanging out with a snowman, raising a little activist, and hugs in the pool, Gene is keeping us all entertained.

The Trainwreck star gave birth to little Gene back in May 2019. Incidentally, Meghan Markle and Prince Harry welcomed their baby boy Archie just hours later, a fact Schumer liked to bring up with hilarious frequency after her own “royal baby” was born.

To be honest, that sort of humor has become the hallmark of Gene’s social media footprint. He is often included on his mom’s Instagram almost as her little comedy partner, her foil, her straight man. Starting when she and Fischer accidentally named their child “genital,” as she admitted on her podcast, to more recent times when they just hang out and riff together.

Gene is already one cool cat, as evidenced by Schumer’s video of him just chilling out in his stroller wearing sunglasses and holding some hand weights. Without lifting them, apparently Gene is too cool for that.

On May 5, 2021, Gene turned 2 years old and Schumer marked the day with an emotional post on Instagram about her husband and her little “Geenie Panini,” who his parents love “as much as he loves busses.”

For Gene’s second birthday, Schumer shared a sweet throwback photo from the day he was born and one of him as a baby staring at his dad. The two of them look so in love it’s seriously emotional.

“Today is our son’s birthday and I woke up emotional as hell thinking about my husband, Chris,” Schumer wrote on Instagram. “He takes care of our family and is a husband and father beyond my wildest dreams.”

“I feel loved and supported always,” she went on to say about her husband. “He takes care of our family and is a husband and father beyond my wildest dreams. Also he has autism spectrum disorder. Being tested and diagnosed has helped us communicate and support each other better... Statistically our son most likely will be diagnosed as well and if he’s anything like his father that is wonderful news.”

When Schumer’s friend and podcast co-host Bridget Everett celebrated her birthday in April, she honored her with a sweet photo of the comedian giving Gene a cuddle.

In a voting PSA for “For The People” in April, Schumer was smart enough to use a genius bribe to get people to watch; Gene. She promised he would appear and the little sweetheart was game for it.

Chilling By The Fountain

Gene joined his mom and dad for a little visit to a fountain in New Orleans in February.

Always There For A Kiss When She’s Down

I mean really down. As in, Schumer was apparently stuck in the snow when Gene toddled over to give her a “snow kiss.” He made her laugh. He gave her a kiss.

Gene was the one feeding Schumer during a sweet video in December 2020, although I’m pretty sure I saw her spit some of it out.

Chilling With Craig The Snowman

By December 2020, Gene was getting old enough to properly become part of Schumer’s comedy routine. As evidenced by their chat with Craig the snowman on Instagram, who wore a straw hat and a robe.

Apparently they were playing hide and seek when Schumer snapped a photo of her son’s feet sticking out from under a pair of curtains and captured the moment by pointing out he’s a “great hider.”

Amid the Black Lives Matter protests last summer, Schumer was already teaching Gene to be a little activist. He joined her and his dad at a protest on Martha’s Vineyard, where people joined to kneel in support of the BLM movement. Including Gene.

Gene joined his mom for a swim in January 2020 and looked adorable.

Speaking of appreciating her time with her son, Gene visited a set Schumer was working on in October 2019 and looked delighted to be with her. That smile though...

After Schumer went back to work, she shared a photo of Gene sleeping on her where she admitted she had “cried from missing him.” Still, as Schumer went on to note, “it’s mostly good to be back and the breaks energize me to be a better mom and appreciate our time even more.”

Gene joined his mom and her friends and their babies for a photo shoot in September 2019, but please pay attention to the disgruntled look on his face as he reaches for her from her friend’s lap. He loves the spotlight, I think.

Ruining Handmaid’s Tale For His Mom

When Gene was less than one month old, he was already impacting his mom’s choices. Specifically her television viewing, as she wrote in a sweet selfie with her baby captioned, “Oh ok so I can’t watch handmaids anymore. #filledwithregret.”

I suspect Schumer has no regrets when it comes to Gene.