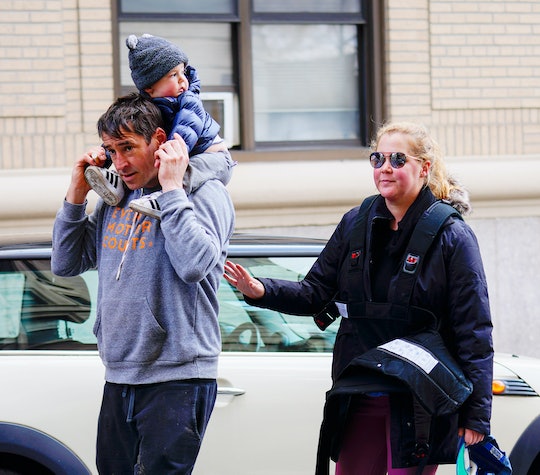 Maternal instincts: parental lore tells us we've got them. They are mystical and difficult to define, but the story goes that there is something innate within us that will guide us to raise our wee ones in ways we might not have imagined. That's how the story goes, anyhow. Just trust your instincts as a mom and you'll be right as rain. Or maybe not. At least that's been Amy Schumer's experience with her mom instincts, as she shared in a recent interview with Seth Meyers on Late Night with Seth Meyers.

This week, the Trainwreck star, who is mom to 21-month-old son Gene with chef husband Chris Fischer, sat down to chat with Meyers about what motherhood has looked like so far for her. When he asked her if she considered herself a good mom, she replied, "Actually, no. It's interesting. You don't know how good of a parent you're going to be."

Schumer went on to share that actress Natalie Portman had told her that she would have more instincts as a mom than she realized, but Schumer has not found this to be the case. "What I'm finding is that Natalie Portman is a huge liar," Schumer said and then let out a little laugh. "Because, so far, my instincts are all dead wrong."

Amy Schumer's mom instincts have not kicked in the way you might expect.

Case in point: it seems Schumer has been reading the parenting book How Toddlers Thrive by Dr. Tovah P. Klein recently and discovered something she and husband Fischer had been doing was "wrong."

"If Chris and I are gonna leave Gene with the nanny, we sneak out," Schumer said. "We literally creep like a cartoon so he doesn't cry and freak out. Page one of this book is literally like, 'Whatever you do, don't sneak out. That's really bad for your child.'"

Another decision Schumer felt showed questionable mom instincts? She accidentally named her son "Genital," as she reminded Meyers. Well, she actually named him Gene Attell Fischer after her comedian friend Dave Attell, but... yeah, it does sort of sound like that.

Most moms struggle with deep insecurity about making mistakes when they parent, and that's OK. As anyone can see from Schumer's social media feed, she's comfortable finding her own way as a mom. And Gene looks to be a very happy little boy, knowing his mom is trying her best. What else is there, really?