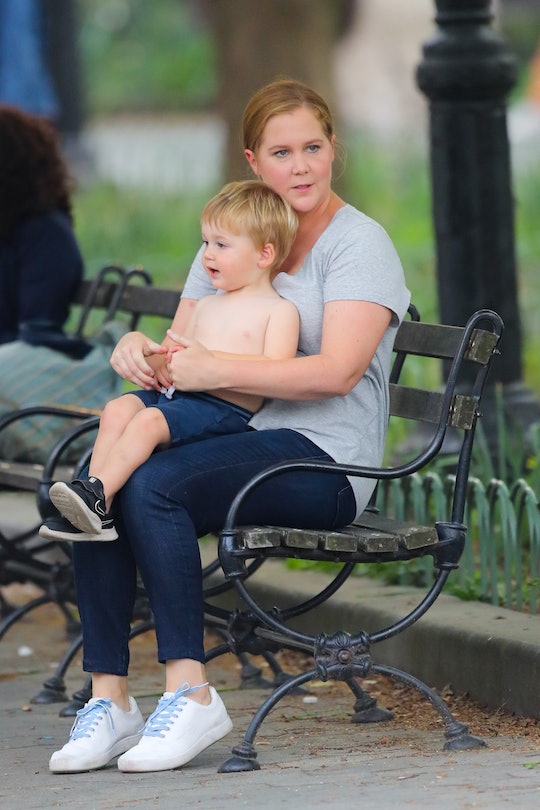 Amy Schumer’s son Gene turns 3 years old in May, which puts him in peak toddler years. He’s old enough to know what he wants, old enough to speak, and old enough to feel sensitive if he thinks someone is slighting him. And like most toddlers, he won’t be having any of that. In fact, Schumer says her son Gene says “no laugh” when she laughs at something he says or does spontaneously, because toddlers are mysterious little creatures who need to feel like they have some sort of power in the world. Or all the power in the world, depending on said toddler.

“He feels very sensitive to us laughing at him, like if he doesn't intend on that,” the Life & Beth star explained in an interview with People. “He knows he's funny. But he only wants to be laughed at when he means to make me laugh.”

The comedian, who shares Gene with husband Chris Fischer and knows a thing or two about comedy herself, shared an example. “I was holding him the other night and he was like, 'I want Daddy to come in.' So I'm like, 'OK, let's call him,' and he goes, 'Is Daddy coming?' And I said, 'Yeah,' and he went, 'Yay!' And I laughed and he went, 'No laugh,' and I'm like, 'Okay. That's fair,' but I tried to explain to him like it was explained to me, 'It's good when people laugh. It means you made them happy and they love you.’”

It probably doesn’t help that Gene is a naturally funny kid, whether he intends to be or not. Like last April when Gene was very particular about only wearing his tap shoes in the house and playing with his dog Tati. Schumer shared a since-deleted Instagram post where Gene could be heard tapping his way through the house, Tati in tow. He was also hailing cabs as a 2-year-old, and I’m sorry but seeing a toddler hailing a cab would make anyone laugh. It can’t be helped.

To be fair to Gene, nobody likes to be laughed at when they weren’t expecting it. I guess he’ll just have to consider being less entertaining. Or more entertaining to allow for a constant stream of laughter. Just like mom.

More Like This
Why Prince Harry Feels Lucky To Be A "Father With A Platform"
Meghan Markle Made A Sweet Little Tribute To Her Daughter Lilibet
Tan France Reveals The Incredible Care Package Gigi Hadid Sent For Baby Ismail
Ray Liotta Has Died At 67. Not Only Was He An Iconic Actor, He Was A Proud Dad.