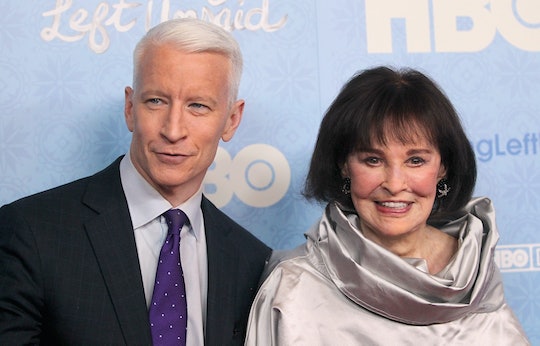 “Mom, I love you, but even for you, that is just batsh*t crazy. That is just nuts.”

Anderson Cooper is the first to admit that he and his late mother, the legendary Gloria Vanderbilt, had an unconventional relationship. “I always viewed my mom as E.T., like this space alien whose spacecraft had crash landed on earth, and it was my job from the age of 10 on to help her rent apartments and buy groceries,” the CNN anchor told Stephen Colbert in an interview on Thursday. “She was not the kind of mom who did things for you.” Well, to be fair to Vanderbilt, it’s not for lack of trying. In fact, Cooper’s offered to carry his baby for him when she was 85 years old. So, yeah, that’s love.

As Cooper shared with Colbert during an appearance on The Late Show, his mother reached out to him when she was 85 to let him know she had been to her gynecologist and been told that she could still carry a baby. When he expressed justifiable concern, she elaborated. She meant that she would be able to carry a child for him. “You get an egg, and fertilize it with your sperm,” Cooper explained that Vanderbilt said at the time. “And then I’ll carry your child.”

“I finally said to her, I was like, 'Mom, I love you, but even for you, that is just batsh*t crazy. That is just nuts,' " Cooper shared with a laugh. "That is so weirdly oedipal on a whole new level. That kid would be on the cover of The New York Post for the rest of its life."

Things didn’t end there, however. A few years later, Vanderbilt sent her son a news clipping about a grandmother in Italy who had been a surrogate for her son and his husband, circling it and writing “See!!” across the story.

Sadly, Vanderbilt died after a battle with cancer at 95 years old before getting the chance to meet her only grandchild, Cooper’s 16-month-old son Wyatt, who was named after his late grandfather, Wyatt Emory Cooper. But she did know that her son was in the planning stages of becoming a parent. "I was able to tell her shortly before she died that I was going to have a baby," he told Live With Kelly And Ryan last May. "Wyatt hadn't been created at that point, he wasn't actually a being at that point. He was an idea in my head, and I was in the process of it. She was thrilled."

Gloria Vanderbilt’s offer to be a surrogate for her son at 85 years old might seem a bit off the wall, but that’s the thing about a mother’s love. You can surprise yourself with how far you’ll go to make your kid happy.