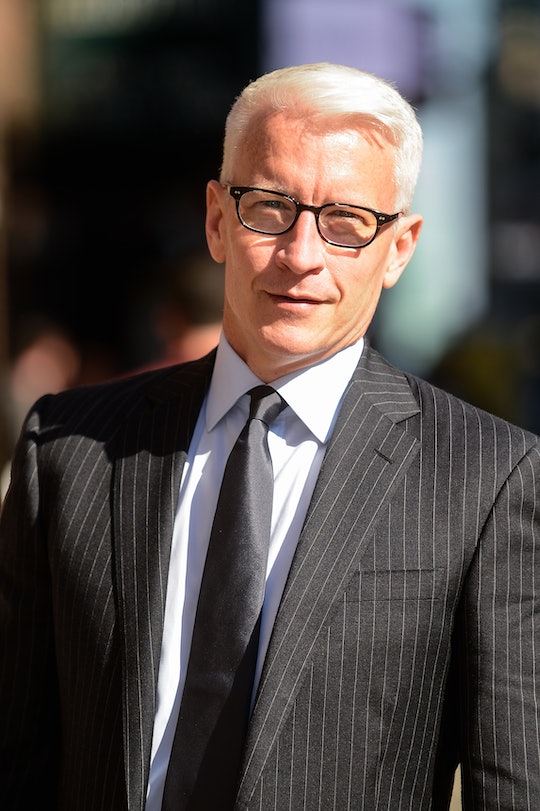 Little Wyatt is getting so big.

What is it like to be the father of an award-winning baby, a sweet little cherub who People magazine deemed the "cutest baby alive?" Pretty fantastic, if Anderson Cooper's precious photos of his son Wyatt are to be believed. Now that Wyatt’s one year old, it’s crystal clear that the little boy was the bright light of the CNN anchor’s year.

Cooper welcomed Wyatt in April 2020 via surrogate, sharing the news on Instagram with an emotional post about how much fatherhood meant to him as a member of the LGBTQ+ community. "As a gay kid, I never thought it would be possible to have a child, and I’m grateful for all those who have paved the way, and for the doctors and nurses and everyone involved in my son's birth,” he wrote.

One year later, Wyatt is growing into his own little person, as all babies do. And his father could not be happier to watch his son, who is named after Cooper's dad Wyatt Emory Cooper, continue to thrive and grow. It's no wonder Cooper is proud, since little Wyatt took People's "cutest baby alive" title from Benjamin Cohen, son of Cooper's good friend Andy Cohen. It's not all about looks, of course. Cooper's love for his son runs far deeper than just a cute little face.

As Wyatt gets bigger, his personality really starts to come out more and more. And in a Feb. 2021 post with his dad, that personality looks to be absolutely sweet. Maybe it’s his eyes, but this photo of Wyatt curled up with his dad and his copy of Goodnight Moon looks like the coziest place in the world to be.

At The Beach With Dad

Wyatt curled up to his dad at the beach.

In November 2021, Cooper shared this sweet beach photo of father and son snuggled up on the sand with the caption, “The greatest thing you'll ever learn is just to love and be loved in return. Eden Ahbez.” Amen to that.

After Cooper’s book about his family, Vanderbilt - The Rise & Fall Of An American Dynasty was released in September 2021, he posed for a photo with Wyatt wearing the cutest little pajamas ever for People. He explained in the caption that the book was “in many ways a letter to my son.” Cooper also admitted at the time that his son was barefoot because he was really into his own feet.

First let’s talk about Wyatt’s amazing little smile and those teeth! Next, let’s talk about Cooper’s delighted face and the lovely message he shared with Wyatt fans on Instagram thanking people for their birthday wishes.

“Thank you for all the lovely birthday wishes!” he wrote. “I am really touched by all the kind thoughts. Getting to see my little boy’s joy-filled face everyday, and watching him grow, is the best present I could ever receive.”

On April 27, Wyatt turned 1 year old and Cooper paid tribute to his son with two photos and a beautiful message. “Today is Wyatt’s first birthday,” he wrote. “I can’t believe it has already been a year. He is sweet and funny, happy and kind, and i love him more than I ever thought possible.”

In a December interview with Ina Garten for CNN’s Full Circle, Cooper couldn’t help but brag about Wyatt’s mature taste in food. “I have the palate of a 5-year-old," Cooper joked. "Apparently a 7-month-old has a much better palate. He gives me hope!" The proud dad added “He’s eating squash and broccoli and mushed cauliflower and mushed peas, none of which I would ever eat as a kid.”

Cooper and his ex-partner Benjamin Maisani aren’t just co-parenting from a distance; they’re living in the same house to care for Wyatt. “We actually still live in the same house, because we get along really well and...yeah, it's weird but it works out," Cooper told Ellen DeGeneres in February, "It's interesting, because he wasn't really sure he wanted to have a kid — which is one of the reasons we probably broke up — but then, he came around to the idea. Now he is such a great parent."

Cooper told Ellen DeGeneres in May that the arrival of his new son had him watching his little boy constantly, even while he slept. "I wanted to have a family of my own forever and have kids,” he told DeGeneres. So excited to have a baby, in fact, that he showed up for a Zoom interview with baby milk spit up on his shoulder. Wyatt has also proven to be the best source of entertainment for Cooper as well, "I can watch him for hours and hours and hours and do nothing, it's amazing. He goes through a whole range of emotions when he's sleeping. It's better than Netflix."

When Wyatt was 10 weeks old, Cooper shared a new photo of his little boy and an update on his favorite things including, "naps and milk, bath time and being read to." By the looks of Wyatt's luminous skin, this seems like a recipe for a great complexion.

"Waiting For Life To Begin"

Wyatt changed everything for Anderson Cooper.

During an interview with the Wall Street Journal Magazine, Cooper opened up about how fatherhood had changed his life. "I’ve often in my life felt like I was waiting for my actual life to begin – it’s obviously ridiculous because I’m 53 years old – but… I’ve been very focused on getting to some place, getting a story. Because I’m focused on (Wyatt), it gives an order to everything."

Cooper also told his good friend Kelly Ripa on Live With Kelly And Ryan in December that life as a father has made him feel "blessed" beyond measure. "I feel like it's woken me up,” he said. “I've always felt like my life hadn't really begun, which is ridiculous, but suddenly you wake up and you're like, 'This is what it's all about.' There's nothing more important than this.' I'm just incredibly blessed and lucky."

Two Cool Dudes Out For A Walk

In February, Cooper shared a photo from a little walk with his blue-eyed boy in a carrier and simply called it “bliss.” Imagine running in to them on your own walk. That really would be bliss.

Working Together For The Greater Good

Cooper shared a post in March trying to raise awareness about pediatric brain cancer after his CNN colleague lost their child and little Wyatt helped him out. “As a new parent, I am lucky that my son is healthy,” Cooper wrote, “but there a lot of kids facing life-threatening illnesses. Francesca ‘Beans’ Kaczynski died of a rare brain cancer when she was just 9 months old. In her honor, we at CNN are raising money for kids with cancer.” Wyatt is already a little activist.

Wyatt had his first taste of catching dad on television when Cooper hosted Jeopardy! in April, and the moment was caught on camera. “Wyatt has never seen me on tv before,’ the proud dad wrote, “and he likely won’t for a long while, but apparently he caught a bit of me on @Jeopardy!”

This article was originally published on April 27, 2021