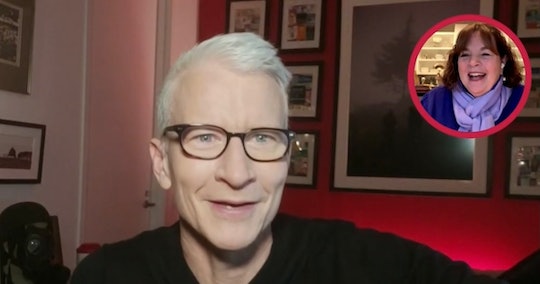 In a recent interview on Full Circle, CNN's Anderson Cooper talked to the Barefoot Contessa herself, Ina Garten, about cooking, comfort foods (they've both rediscovered peanut butter and jelly lately), and Cooper's adorable baby son Wyatt. It turns out that while Cooper himself isn't much of a foodie — a fact he sheepishly admitted to Garten — his 7-month-old is doing him proud now that he's begun to eat solids. "I have the palate of a 5-year-old," Cooper joked. "Apparently a 7-month-old has a much better palate. He gives me hope!"

Cooper proudly reported that while Wyatt is still primarily eating milk, he's happily been enjoying oatmeal, squash, broccoli, cauliflower, and peas. "None of which I would ever eat as a kid," he told Garten. "I'm so thankful that he is." So are we: because we want to ensure that Wyatt sustains those adorable chubby cheeks. The world needs them, especially in 2020. (We're not the only ones who have fallen under the spell of the baby's charms; he was recently named Cutest Baby Alive" by People magazine.)

Adorable and eats his vegetables? Anderson, please recognize the jackpot you have won with this.

Born in April by surrogate, Wyatt is Cooper's first child. In an Instagram post announcing the birth, Cooper wrote, "As a gay kid, I never thought it would be possible to have a child, and I’m grateful for all those who have paved the way, and for the doctors and nurses and everyone involved in my son's birth."

In an unconventional twist, Cooper co-parents with his former partner Benjamin Maisani. "There is no acrimony between us," he told People in June. "Even though ... he's my ex, he is my family."

During Cooper's chat with Garten, she was glad to hear Wyatt is on a more well-rounded culinary path than his father seemed to be, and had a suggestion to keep up the good work. "You should make him my roasted applesauce. Children love it!"

Of course, it's entirely possible that tasting an Ina Garten recipe at such a tender age could set that bar really high. "Dad, is this homemade applesauce with orange zest? No. Take it away this instant."