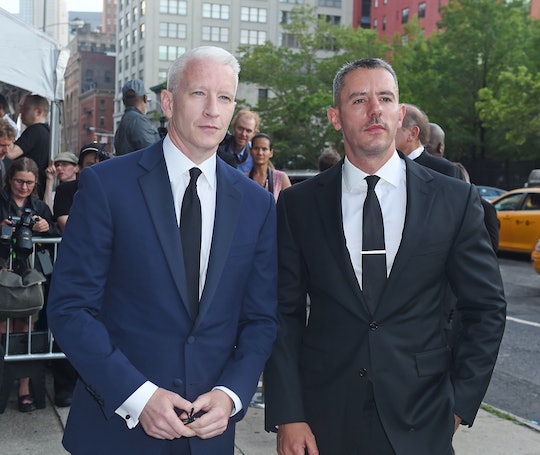 Even though his son is still a newborn, Anderson Cooper is fast becoming the most evolved dad around. In a recent interview, Cooper shared that he'll be co-parenting his baby boy, Wyatt, with his ex-partner because, according to the CNN anchor, he's "family." And this is what human evolution looks like in the real world, my friends.

On May 1, Anderson Cooper shared the exciting news that he had become a dad for the first time. "On Monday, I became a father. This is Wyatt Cooper. He is three days old," he said last week on Instagram. Little Wyatt was born via surrogate, who Cooper referred to as "remarkable" and noted that she has a "beautiful family of her own, a wonderfully supportive husband, and kids, and I am incredibly thankful for all the support they have given Wyatt and me."

The support Cooper is receiving from his surrogate and their family is not the only kind he can count on where Wyatt is concerned either. During a Tuesday night virtual interview on Late Night With Stephen Colbert, Cooper said he and his ex-partner Benjamin Maisani are planning to co-parent little Wyatt together. Although Cooper and Maisani broke up in 2018 after nine years together, the CNN news anchor told Colbert that his former partner is "going to be a co-parent to Wyatt, even though we're not together anymore."

"But, you know, he's my family and I want him to be Wyatt's family, as well," Cooper said.

Considering the fact that Cooper lost his mom Gloria Vanderbilt last June and his father, who Wyatt is named after, died when he was just 10 years old, it's particularly momentous that he and Maisani are able to co-parent together. It really does take a village to raise a child, after all.

Fortunately for the new dad, he seems to have several people to lean on as he learns the ropes of parenthood, including longtime pal Andy Cohen. During the same interview with Colbert, Cooper said little Wyatt has been wearing hand-me-downs from Cohen's adorable 1-year-old son Benjamin, and it seems the Bravo TV host has shared more than just clothes with his pal.

On Monday, Cohen admitted during an episode of Radio Andy that his nanny has moved over to Cooper's house to give the new dad a hand, according to Entertainment Tonight. "She is now with Anderson and I know she’s going to get Wyatt on a great sleep schedule just like she got Ben," Cohen said.

Anderson Cooper is co-parenting with his ex-partner and looking to more experienced dads like Andy Cohen for guidance. In other words, he has this whole evolved parenting thing on lock.