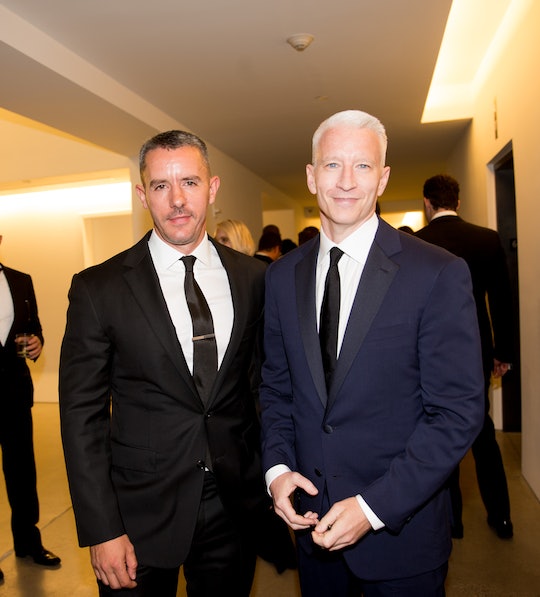 Their romantic relationship might have ended, but their love for little Wyatt conquers all. In a recent interview with Ellen DeGeneres, Anderson Cooper shared that he's living with ex-boyfriend Benjamin Maisani in order to share parenting duties for baby Wyatt. The CNN anchor admitted to the talk show host that their situation might be "weird, but it works out." And who could blame those two proud dads for wanting to get as much time with People's Cutest Baby Alive as possible?

Cooper welcomed his son Wyatt Morgan Cooper last April, two years after he and his boyfriend of nine years, nightclub owner Benjamin Maisani, broke up in 2018. But just because they decided to end their romantic relationship doesn't mean they have cut off all contact. Far from it.

Not long after Cooper told the world that little Wyatt had been born, he opened up in an interview on Late Night With Stephen Colbert about his plans to co-parent with Maisani, explaining that he "is going to be a co-parent to Wyatt, even though we're not together anymore. But, you know, he's my family and I want him to be Wyatt's family, as well."

Cooper told DeGeneres on Thursday that he and Maisani are doing their best to co-parent 9-month-old Wyatt together, even going so far as sharing their living space. "We actually still live in the same house, because we get along really well and...yeah, it's weird but it works out," he said. "It's interesting, because he wasn't really sure he wanted to have a kid — which is one of the reasons we probably broke up — but then, he came around to the idea. Now he is such a great parent."

Baby Wyatt has two dedicated co-parents living with him.

When Wyatt was crowned People's Cutest Baby Alive in November, handily taking the title away from his pal Benjamin Cohen, son of Andy Cohen, he spoke to the news outlet about what his life is like now that he's a first time dad at 53 years old. "I sort of wonder, what was I waiting for? This is a new level of love," he told People. "It's unlike anything I've experienced, and yet it's also very familiar and incredibly special and intimate. It's really extraordinary."

Cooper wasn't the only parent feeling emotional since Wyatt's arrival. He told People that Maisani started getting "weepy" after becoming a dad. "And Benjamin, I’ve never seen him cry, but I couldn’t believe how weepy he gets with Wyatt," Cooper said. "I find myself being overwhelmed with emotion, and it’s a lovely thing.”

It truly is a lovely thing to see two dedicated dads moved to tears over the love of their little boy.