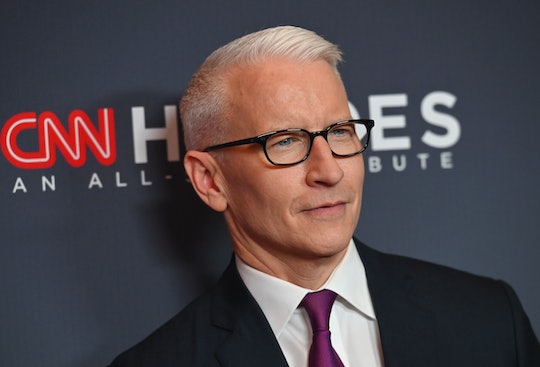 There are so many adorable things about Anderson Cooper’s 17-month-old son Wyatt that it can be tough to choose just one. Unless you’re the little guy himself, of course. For him it’s all about his feet. Wyatt Cooper is already practicing self-love on a deep, instinctive level, and that love starts at his sweet little feet.

Cooper welcomed his son Wyatt in April 2020, and since then he and ex-boyfriend Benjamin Maisani have been co-parenting the little boy together. The proud dad can not stop enthusing about every aspect of his life with Wyatt, not that anyone can blame him. Little Wyatt was crowned the Cutest Baby Alive in 2020 by People magazine, after all, taking the title from Andy Cohen’s son Benjamin. And he won that without sharing his favorite thing about himself. His bare feet.

In an interview with Ellen DeGeneres, Cooper said that his son is “always showing off his feet.” He added, “I'm not sure why, but there he is,” pointing to a recent photo shoot father and son did for the cover of People magazine where Wyatt is bare foot and wearing pajamas.

Wyatt Cooper is proud of his feet.

Wyatt’s love for his own feet started early. Cooper noted that his son’s first word was “shoes,” which of course a person tends to put on their feet. Babies often tend to have a real thing for their feet, waving them in the air and even putting them in their mouths sometimes as they figure out their bodies and how they work. So Wyatt’s foot love is not terribly out of the ordinary. Naturally, everything the little boy does is fascinating to his doting dad. Even just being friendly at a cafe is enough to get Cooper waxing poetic.

“He does this thing where we go to a coffee place and he'll walk around and look at people, and once they make eye contact with him he'll laugh," Cooper told People recently. "I love how he interacts with strangers and takes joy in them. I'm charmed by everything he does, annoyingly. And being there when he wakes up and taking him out of the crib, it's just the best.”