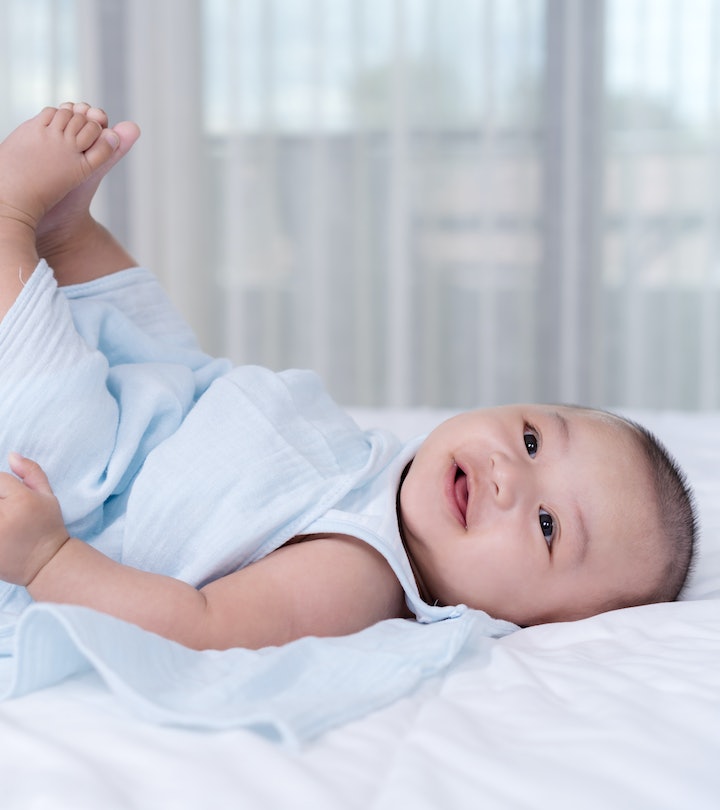 Here's Why Babies Love Kicking Their Little Feet In The Air

Watching the unbelievably cute things babies do is something parents never get tired of. (It more than makes up for the explosive poops and shrieks of colic.) The way they smack their lips when they sleep, the gummy smiles, their first attempts at rolling over and crawling — all totally precious. But why do babies put their feet in the air and try to grab those sweet little toes? You might be surprised to know that this baby milestone is more than just an Instagrammable moment.

The first year of life is an almost nonstop journey of physical and mental milestones, and leg motion is one of them, explains Courtney Jane Wusthoff, M.D., MS, neurology director of the LPCH NeuroNICU at the Stanford Division of Child Neurology in Palo Alto, CA. "Most babies will hold their legs or feet in the air at least some of the time, right from birth," she tells Romper via email. "A healthy newborn baby resting on her back will have a tendency to bring her arms and legs in toward her body, with the hips bent to bring the legs up toward the belly."

As the weeks go on, a baby's leg muscles become stronger and their leg motions become smoother, which helps prepare them for rolling over and sitting. "By three months of age, most babies can support some of their weight with their legs when they are held up in a standing position on a flat surface," says Dr. Wusthoff. (She advises against using baby walkers, which "don't let babies support enough of their weight to strengthen their legs in the same way.")

Those leg motions become more controlled by 4 to 6 months; parents may notice that their baby starts kicking when they're happy or excited. The next step of leg development is the ability to kick purposefully at a toy or other target. Notes Dr. Wusthoff: "The first few times may be by accident, but with practice, your baby will get better at kicking at objects intentionally."

This is also the time at which most babies start to discover their wiggly feet and bring their toes to their mouths. Apart from the fact that it's an irresistible sight, it also builds an infant's ability to coordinate both hands and feet together. When a baby mouths their feet, it's also an important sensory experience, according to Health & Parenting; they're learning both how their feet feel in their mouth, and how their lips and tongue feel when they're exploring a mouthful of toes. Why the fascination with feet? They're often the closest thing within reach when the toys have been put away and Mom's hair isn't available for yanking.

At times, leg play continues even during restful periods or at bedtime. "Some babies may prefer to keep their legs in the air, or even sleep with their knees up toward their bodies, or knees in the air," adds Dr. Wusthoff. This is totally normal, not to mention another ridiculously cute habit that parents fondly look back on when their children are lanky teens sprawled and snoring on rumpled sheets with their cell phones close by.

All this legwork pays off toward the end of baby's first year, when they start putting their weight on their feet, then standing upright while holding onto tables, hands, or anything close by. Finally, of course, come those first steps, which act as an alert to parents that they can never fully fall asleep again for the next 18 years.

As with other milestones, parents should pay attention to their baby's leg motions to catch any early signs of trouble. "If a baby never raises their legs up into the air when lying on their back, parents should talk to their doctor," says Dr. Wusthoff. "Likewise, if a baby used to be able to do something consistently, but then stops doing it — like kicking at objects or bear weight standing up — that's a reason to talk to a doctor." The American Academy of Pediatrics has a helpful website on physical developmental delay that can help parents determine if their child's motor skills are on target.

All that leg-raising and kicking may make it challenging to put on your baby's onesies or buckle them into a car seat, but it's reassuring to know that it's an important step in the right direction, so to speak.