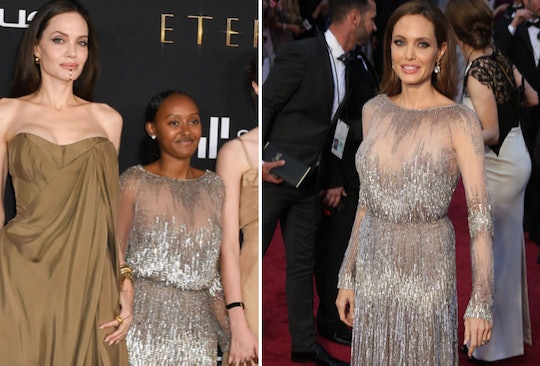 Angelina Jolie made a return to the red carpet on Monday in more ways than one. She and five of her kids attended the premiere of the new Marvel movie Eternals to celebrate her role in the film, and one dress in particular looked very familiar. As the actress herself proudly shared, Jolie’s daughter Zahara wore her mom’s 2014 Oscar dress.

Jolie looked incredibly proud as she posed for photos outside the Dolby Theater in Los Angeles on Monday alongside 16-year-old Zahara, 20-year-old Maddox, 15-year-old Shiloh, and 13-year-old twins Vivienne and Pax. The Maleficent star’s 17-year-old son Pax was not in attendance. The whole family was all smiles and looking very dressed up, and Jolie explained their looks to Entertainment Tonight as “all mixed with vintage, and in my old Oscars dress. We did all vintage and upcycled my old stuff.”

Zahara’s dress was perhaps the most familiar in all of those upcycled looks. Her mom wore that Elie Saab long-sleeved number to the 2014 Oscars alongside ex-husband (and Zahara’s dad) Brad Pitt.

Who wore it best? Both mom and daughter obviously.

Jolie just sort of breezily loaning her daughter an Oscar dress to wear to a movie premiere seems pretty on point for the unconventional mom. In February, she told British Vogue that she’s often felt less than traditional when it comes to her parenting style. “I feel like I’m lacking in all the skills to be a traditional stay-at-home mom,” she explained. “I’m managing through it because the children are quite resilient, and they’re helping me, but I’m not good at it at all. I feel like we’re such a team. It may sound clichéd, but you love and you try, and even if you burn the eggs, that doesn’t matter in the end.”

The mom of six clearly isn’t overly precious about allowing her kids access to couture fashion. When she and Brad Pitt married in France in 2014, she wore a stunning dress created for her by Luigi Massi, the master tailor behind Atelier Versace. The back of the dress featured colorful drawings by her kids which were all sewn into the designer dress. Because this mom knows kids and couture can actually be a perfect blend. And she has loads of dresses to go around.