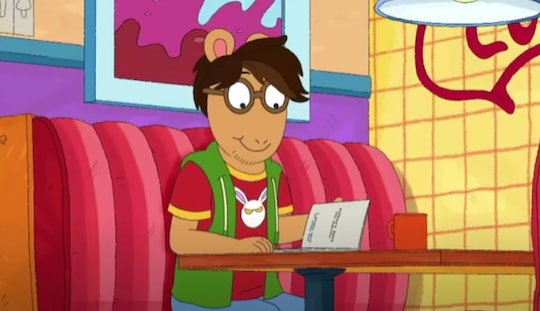 Just try to sing along to “And I say HEY! (HEY!) What a wonderful kind of day” without crying.

The Arthur series finale has officially happened. It was a long journey for the sweet bespectacled aardvark and his pals and it was a bittersweet moment for fans. In fact, plenty were pretty much heartbroken when PBS was announced that the 25th season would be the last. But there was a light at the end of the tunnel, and it was worth waiting for. The last episode of Arthur called “Blabbermouth/All Grown Up” featured Arthur, D.W., Francine and the rest of the gang as adults. Yes, adults. Sure, it’s sad to say goodbye, but what a way to end it.

The episode sees Arthur, 20 years later, with long floppy hair if you can believe it, sitting at a booth at the Sugar Bowl getting ready to show his friends the graphic novel he’s written. And that graphic novel is about them. Growing up. In fact, Chapter One is “How I got my first pair of glasses,” just like the very first episode of Arthur called “Arthur's Eyes; Francine's Bad Hair Day,” which aired in 1996. It seems the entire series may have been based on Arthur’s graphic novel.

As for the rest of the gang, Arthur’s little sister D.W. grew up to be a traffic cop, Buster Baxter is a school teacher, Binky is a weatherman, Francine has a sneaker shop, and of course Muffy Crosswire is running for mayor.

‘Arthur’s final episode sees the kids all grown up.

The last episode, which aired live on PBS Kids YouTube on Monday, brought up some big emotions from viewers. Especially ‘90s kids who were feeling nostalgic seeing the end of an era. One fan pointed out that the original voice actor behind Arthur Read for the first five seasons, Michael Yarmush, returned to lend his voice to adult Arthur.

‘Arthur’ is all grown up.

Another Twitter user was also left in tears by the finale, “this arthur series finale had my grown a** in actual tears and I don't know why. I grew up with this show for so long and to see them all grown up with successful careers makes me feel a sense of pride.”

‘Arthur’ finale sees the gang all grown up.

Another remembered watching Arthur at a very specific time in her life, writing: “BRB watching the @PBSKIDS Arthur series finale. I remember coming home from school in the 4th grade, eating my bagel bites, doing homework, and devouring this show. My own child just started watching episodes a month ago.”

‘Arthur’ case is all grown up.

Arthur creator Marc Brown was also featured on the episode as the library patron who introduces Arthur to the idea of becoming a writer, and this was simply too much for one social media user who wrote, “so arthur’s story ended by having him become an actual author. the person who pushed him into that career, marc brown (the creator of arthur). oh and the voice of adult arthur was the original voice of arthur (Micheal Yarmush) i’m emotionally wrecked rn.”

‘Arthur’ characters are all grown up.

Finally, many people took to social media simply to thank Arthur for being such a wonderful series these past 25 seasons. “thank you marc brown, pbs and arthur for literally everything, this show is so important and im glad it became something my whole family enjoyed <3”

‘Arthur’ cast is all grown up.

While the original series has ended, the official Arthur Twitter page shared an important reminder: “Remember to Tell Your Friends: Arthur is NOT going away, episodes will continue to play on @PBSKIDS and on the video app. NEW Arthur content is coming! Stay tuned for more information on a future podcast and digital shorts. Thanks for being with us for 25 years!”

At least we got to see the gang all grown up. And Arthur with splendid hair. It was worth every minute.