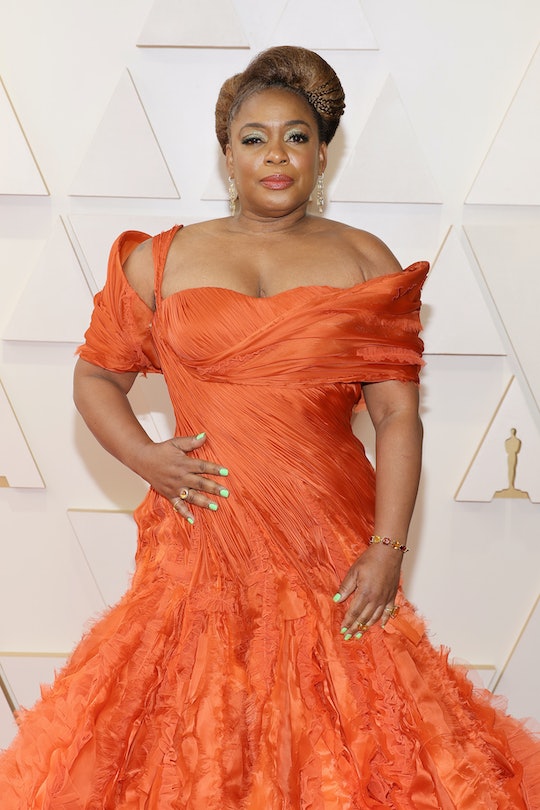 “Her name is Jacqueline and I'm Jax's baby.”

Actress Aunjanue Ellis’ late mother was with her in spirit at the 2022 Academy Awards. The King Richard star, who is nominated for best supporting actress, honored her mother with her gown when she arrived on the red carpet in an orange tulle gown with the words “Jax Baby” embroidered on the arm.

Ellis made it known weeks before the Oscars on Sunday that she wanted her late mother to be part of her first Academy Awards. In a March 7 interview with Good Morning America, Ellis shared that she made a special request for whoever designed her dress. “Whoever I'm wearing, I'm just insisting that my mother's name be somewhere on the dress,” Ellis said. “She left me a couple years ago and I want her with me that night in some sort of way.”

That request was made possible by Donatella Versace Sunday night. Embroidered on the left shoulder of her dress was “Jax Baby,” an ode to her mother’s name and another special person. “Her name is Jacqueline and I'm Jax's baby,” she told Laverne Cox on Live from E!: Oscars on Sunday. “My nephew's name is Jax as well.”

Ellis portrayed Oracene “Brandy” Price, the mother of Venus and Serena Williams, in King Richard, which also stars Demi Singleton, Saniyya Sidney and Will Smith, who is also nominated for Best Actor.

In an interview with The Hollywood Reporter, Ellis spoke about feeling “protective” of Price and how she was essentially the “builder” of her daughters’ tennis dreams. “Ms. Oracene was the builder of that dream. Architects can sketch something and they can walk away, and then the builders are there every day putting in the work and the sweat,” she told the magazine. “I know that there are going to be hundreds — probably after our lifetimes — more stories that are going to be told about Venus and Serena Williams. But how many times are we going to have a chance to tell the truth about their mother?”