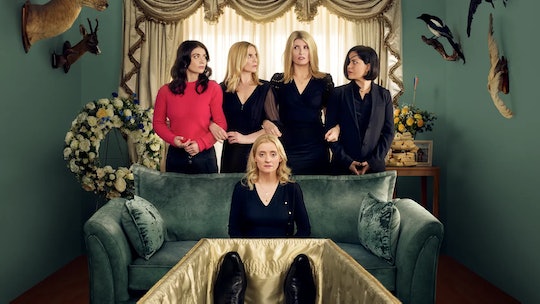 There’s no stopping those Garvey sisters.

Nobody does dark comedy better than the Irish people, as evidenced by the very excellent Apple TV+ limited series Bad Sisters. The series was a breakout hit of 2022, one of those shows that appeared to be built on word of mouth from hardcore fans more than anything else. If you loved it, you really really loved it. So you’ll be happy to hear that the deliciously murderous Garvey sisters are getting a second season.

[Warning: spoilers ahead for Season One of Bad Sisters.]

The Garvey sisters are coming back.

But John Paul (Claes Bang), or “The Pr*ck” as he’s known by the Garvey sisters, will not be returning. Because, as fans of Bad Sisters will remember, Grace’s (Ann-Marie Duff) vile husband John Paul is dead in episode one. And truly any one of the sisters had reason enough to kill him, as we learn through the rest of the series, which is adapted from the Belgian series Clan by Sharon Horgan. Matriarch Eva (Horgan) has her reasons, as do her sisters Ursula (Eva Birthistle), Becka (Eva Hewson)and Bibi (Sarah Greene). They’re all into seeing the end of toxic, horrible John Paul, but which one of them pulled it off?

And what happens now that he’s gone? That’s the question we’ll hopefully have answered now that Apple TV+ has ordered a second season. Even if series creator Horgan had no plans for another season of the Garvey sisters.

Everyone loves the Garveys.

Horgan told Variety in November that Bad Sisters was planned as a limited series. “Well, it’s a really weird one, because it absolutely ended where it ended,” Horgan said at the time when asked about a second season. “The original series was a limited series and I approached it in that way entirely and felt like the ending was satisfying. But it’s been mad, the response, especially to the to the sisters, especially to that family. It’s a tricky thing to come up with characters that an audience love and so – I don’t know. If I came up with a brilliant idea, if I thought of something that I thought was worthy, then maybe.”

Since Bad Sisters is coming back for a second season, apparently she thought of something worthy.

When will Season 2 of Bad Sisters come out?

Horgan herself confirmed that a second season of Bad Sisters had been ordered back in November, but did not share details about casting, release dates, or any plot details. “If you’d have told me three years ago that I’d be making a series about five murderous sisters chasing a man around Ireland trying to kill him I’d have said; yeah, that sounds about right,” Horgan said in a statement at the time per The Hollywood Reporter. ”The response to our show had been beyond what we could have hoped for. It gave us the opportunity to shine a light on stories that don’t always get such a global platform. I look forward to getting chilly in the Irish Sea one more time.”

How to watch Bad Sisters while you wait.

It could be some time before the second season of Bad Sisters comes out, so why not rewatch the first season while you wait on Apple TV+? That’s what I’ll be doing.

More Like This
Hey Fellas, 'Ted Lasso' Season 3 Is Coming Soon
When Does 'Yellowstone' Season 5 Come To Peacock? Not Soon Enough
Freeze! The Single From The New 'Bluey' Album Just Dropped
Exclusive: Watch How A Group Of Princesses Save The Day In Netflix's New Animated Series
What Parents Are Talking About — Delivered Straight To Your Inbox