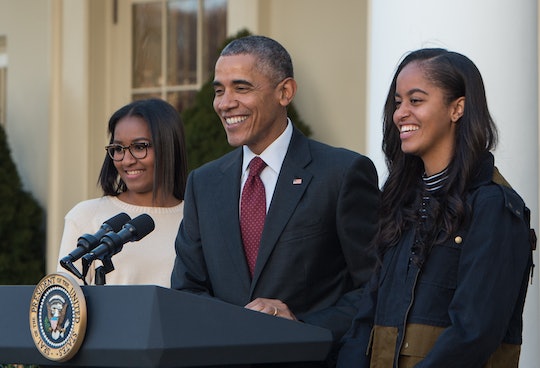 Obama and Bruce Springsteen discussed the topic at length on a recent episode of their podcast.

Whether it’s violence, sexual conquests, or excelling in sports, President Barack Obama talked to his daughters about toxic masculinity. Indeed, when they were growing up, the former POTUS didn’t avoid the topic with his daughters, 19-year-old Sasha and 22-year-old Malia, as he shared during a recent conversation with Bruce Springsteen on their podcast.

During Monday’s episode of Renegades: Born in the USA, the two men talked about their relationships with their own fathers, male role models, and how the role of men has changed in today’s society, according to an excerpt shared with USA Today. And, naturally, Obama’s two daughters came up in their conversation.

“I talk to my daughters’ friends about boys growing up, and so much of popular culture tells them that the only clear, defining thing about being a man, being masculine, is you excel in sports and... and sexual conquest,” Obama told Springsteen, who added that “violence” is also associated with being masculine.

The Promised Land went on to explain how these issues were buried by their own fathers and other male figures in their lives. "There were some qualities of the traditional American male… that are absolutely worthy of praise and worthy of emulating," Obama said on the podcast. "That sense of responsibility... make some sacrifices for your family or for future generations. The greatest generation showed that again and again. And that handling your business… that sense of responsibility of being an adult."

“There is a bunch of stuff in there that we did not reckon with, and now you’re seeing with Me Too part of what we’re dealing with in terms of women still seeking equal pay, part of what we’re still dealing with in terms of domestic abuse and violence,” Obama went to say. “... There was never a full reckoning of who our dads were, what they had in them ... How we have to understand that and talk about that. What lessons we should learn from it. All that kind of got buried.”

In the past, Obama has often given kudos to his daughters’ strong personalities. In a November 2020 interview with InStyle magazine, for instance, he praised them for their "badass" qualities. “Sasha is, as Malia describes it, completely confident about her own take on the world and is not cowed or intimidated — and never has been — by anybody’s titles, anybody’s credentials,” Obama shared with InStyle. “If she thinks something’s wrong or right, she will say so.”

As for Malia, he called her buoyant. “She’s somebody who enjoys people, enjoys life, and enjoys conversation. She’s never bored, which is a badass quality that can take you places.”

With Malia attending Harvard and working on Donald Glover’s new show and Sasha getting a degree at University of Michigan, it’s hard to disagree with our 44th POTUS.

More Like This
The Bear’s Jeremy Allen White Is A Private Breakfast Chef For His Daughters
Elon Musk Reveals He Gave Himself & His Son X Matching Haircuts In Rare Throwback Pic
Nick Cannon Welcomes Baby #8, His First With Bri Tiesi, In Beautiful Home Birth
Pregnant Chrissy Teigen Cracked A Joke About Trump As She Shared A New Ultrasound Photo