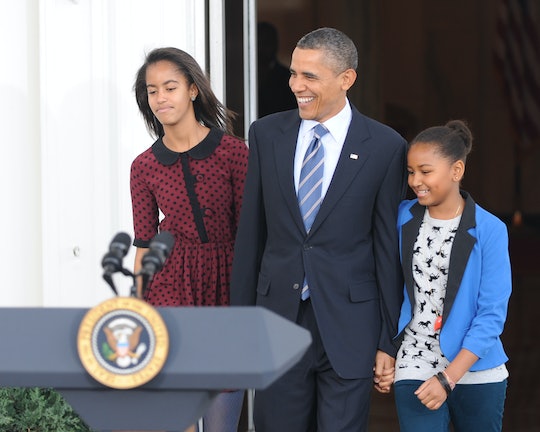 Barack Obama Had No Problem Listing His Daughters' Best Qualities

He also bragged a little about wife Michelle, because who wouldn't?

In a recent interview with In Style magazine, former President Barack Obama described his daughters' coolest traits with such eloquence it will bring a tear to your eye. The proud dad of two had no trouble coming up with examples of some of the things he loves the most about 22-year-old daughter Malia and 19-year-old Sasha, and of course he couldn't wax poetic about the amazing women in his life without including his wife Michelle. When it comes to being a cheerleader for his family, Barack Obama remains in a class all his own.

Obama spoke to the magazine in the subject of the "women who made" him, specifically extolling the virtues of his wife and two daughters and their "badass" qualities, of which he said they have many. Take his wife Michelle, for instance. While Obama allowed that most people are well aware of his wife's amazing talent for public speaking (especially when it comes to President Trump's refusal to concede the election), he figured people are probably "less aware of what it’s like to work out with Michelle when she’s really in her groove. And sometimes that includes her boxing. You don’t want to get in the way when she’s working on a bag — including some kicks. There’s force there."

When it comes to his oldest daughter Malia, who is currently at home with her parents studying her Harvard classes remotely, Obama says that "she is just buoyant. She’s somebody who enjoys people, enjoys life, and enjoys conversation. She’s never bored, which is a badass quality that can take you places."

Youngest daughter Sasha is a student at the University of Michigan and also studying remotely from her parents' home. All of that extra time together must be giving the dad a little insight into his girls, because he had lots to say about his youngest and her own considerable attributes, such as that she will not be "cowed or intimidated" no matter the situation. "If she thinks something’s wrong or right, she will say so. When she was 4, 5, 6 years old, once she made a decision, she would dig in and couldn’t be steered off it. I write about it in the book, how we were trying to get her to taste caviar when we were visiting Russia. She was like, 'Mnn-nnh. No. Sorry. That looks slimy. It’s nasty. I’m not going to do it — even if I’ve got to give up dessert.' And that part of her character has always been there."

Obama's new memoir, A Promised Land, offers a peek into his early years (his childhood nickname was "Bear"), some insight into what it was like for his family in the White House, the way their young family struggled, and the guilt he admits he felt for time spent away from his daughters.

But at the end of the day, he seems to understand and appreciate the women who made him. He sees them. And that, my friends, is what parenthood is truly all about.