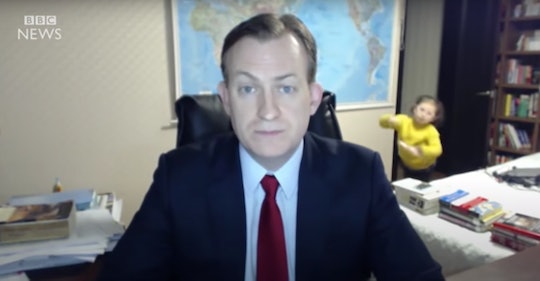 BBC Dad Showed Us The Future. I Wish He Had Changed It.

Remember how his wife came flying in to snatch the children up in the middle of his interview? Moms are still doing that... with their own Zoom meetings in the background.

There are plenty of viral videos that perfectly encapsulate a micro-moment in the zeitgeist — like a smell or a song, they can bring you right back to a particular time. But very few are wildly popular and spookily prescient. Which brings me to BBC Dad. Robert Kelly (that’s his real name) and his sneaky offspring made their debut exactly four years ago today and oh how young and naive we all were then.

Everyone has a favorite part of this iconic video. Is it the way he tries to gently shove his dancing child out of frame and onto the bed? Is it the way the on-air host gently says, “I think your child has come in behind you” as if the dad had no idea? Is it the baby wheeling merrily into the room like he’s arriving right on time to the party? Or the way their mother comes flying in around the corner, snatching at the baby in the walker and grabbing the toddler as if the room is on fire?

It was one of those rare things everyone could either relate to or imagine: children bursting into a pinnacle moment of your career, a chance for you to feel professional and successful and like you know what you’re doing, and then BAM. Chaos. It was funny, because it was funny. Kids are funny. The way his oldest bounces into the room like she’s living her absolute best life is funny. The stress of trying to parent and be a solid, successful person who works is funny... when it manifests itself like this.

In the after-glow of the viral video, there were some thoughtful conversations that basically boiled down to, “Wow, this stuff happens all the time with families. Employers should be more understanding!” It seemed like a new chapter in the balance of work and family, one triggered this time by a father. And then, all of a sudden, here we are. Those of us who are lucky enough to do so are all BBC Dad now, our children whizzing around the background of our zooms, demanding snacks while we mute the conference call, and refusing to join their 200th day of remote school just as a work deadline looms, all while you stress-email every co-worker you’ve ever had to say, “Sorry. Pandemic wall today.”

The thing is — not much has changed since BBC Dad became an etch in the global block of viral moments. Sure, the Pandemic sent us all inside, but there still aren’t enough flexible bosses and workplaces where people feel comfortable laughing at their toddler bouncing in behind them as they conduct a video call. Instead, mothers are being fired because their children are too noisy and women account for 54% of all jobs lost during the coronavirus pandemic.

Things haven’t changed because that was BBC Dad. That wasn’t BBC Mom. BBC Dad isn’t expected to juggle his children while also conducting an on-air interview. BBC Mom would’ve pulled her kid into her lap, offered a brief introduction, and continued with her segment. It probably wouldn’t have gone viral. Nobody would’ve thought it was funny. Nobody would’ve applauded her. That’s what moms should do.

I’m not blaming BBC Dad for panic-shoving his toddler out of frame (relatable), and I’m not saying any other parent in the same situation wouldn’t have done that, too. But society has proven, time and time again, that while moms are taking on the brunt of household duties and childrearing and also working, dads are expected to be at every meeting, to have quiet conference calls, to have a typical 9-to-5 schedule that doesn’t require breaks for homeschooling or naps. Employees aren’t always flexible to moms — of course they aren’t going to be flexible to the dads.

So that leaves moms still doing the same thing that happened in the BBC Dad video. Rushing into a room, grabbing up children so they don’t disturb Daddy’s big work moment.

Only now she’s doing it with her own Zoom meeting happening on the floor of the playroom.