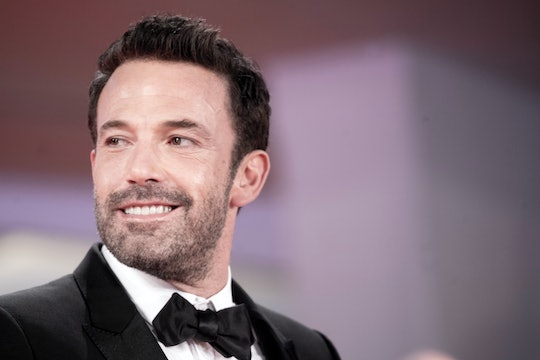 Ben Affleck Is Mr. Jennifer Lopez, But First & Foremost He's A Dad Of 3

“They’re the focus of my life.”

Ben Affleck may be Jennifer Lopez’s new husband, but it’s been pretty clear over the years that his primary role for more than a decade has been that of dad, calling fatherhood “the focus of my life.” Affleck has three children, whom he co-parents with ex-wife Jennifer Garner... and by both of their accounts, it’s something they do well.

“I hope I'm a pretty good dad. I certainly try very hard,” he told Hoda Kotb on Today in 2019. “Dads are so important to kids, and it’s our responsibility to be part of their lives, to be in it as moms. And I'm lucky they got a great mom and she helps out a great deal with making sure we co-parent in as good a way as possible.”

“[Being a dad is] the focus of my life. It's what I love doing,” he added. “It's what makes me happy, and the rest of the stuff follows."

His oldest child, daughter Violet, was born in 2005.

The first of Affleck’s children, Violet Anne Affleck, is now 16. Violet was born in December of 2005, six months after Affleck and Garner got married. In 2013, when Affleck and Garner spoke in favor of a California bill that would protect children from harassment of paparazzi and photographers, Violet spoke as well to give a child’s perspective on her negative experiences. Garner has described Violet, even as a little girl, as “hyper-articulate.”

“She is Ben Affleck’s daughter,” she told the Hollywood Reporter, before continuing, “She stood up on a chair in a little velvet dress, with her hair a bit back and her glasses on and she didn’t say her R’s right, and she said: ‘We didn’t ask for this. We don’t want these cameras, they’re scary. The men are scary, they knock each other over and it’s hard to feel like a kid when you’re being chased.’”

While Violet looks just like her mama, she and her dad maintain a close relationship... one where, in typical teen fashion, she teases him for his use of emojis in group chats. (To be fair, according to Garner both parents are on the receiving end of a little bit of teen teasing.) But it’s not all razzing. Violet has been regularly seen out with her dad over the years, as well as with his new wife, Jennifer Lopez, and her children.

His middle child, daughter Seraphina, was born in 2009.

Seraphina Rose Elizabeth Affleck, now 13, was born in January 2009. Garner has shared that her mischievous middle child even wrote a formal note describing her as a “fun killing mom.” Seraphina, who is known for her quirky, casual, somewhat nerdy-chic fashion sense, is often spotted out with both her mom and her dad and, more recently, with her step-sibling, Lopez’s child Emme, who is 14. The two have seemed to hit it off since their parents started dating in 2021.

She, along with her siblings — as well as Emme and her twin brother, Max — were reportedly present at her dad’s very small Las Vegas wedding to Lopez in mid-July.

His son Samuel is the baby of the family.

Born February of 2012, Samuel Garner Affleck is now 10, making him the baby of the family. In a segment on Jimmy Kimmel Live in 2020, Affleck shared a sweet story of Samuel’s birthday gone wrong before it went really right. Samuel was apparently impressed that his dad would be starring in The Last Duel with Adam Driver aka Kylo Ren from Star Wars. When Affleck was rushing from filming in London to get to Los Angeles in time for Samuel’s birthday, his presents didn’t arrive in time... but Adam Driver’s gifts, including a special birthday video from “Kylo Ren” did. “It was an incredibly moving and powerful moment,” he shared. “Adam made me a hero to my kid and I will never, ever, ever forget it.”

The youngest Affleck most recently made headlines when he got into a fender bender at a car dealership where his dad was test driving a new car – according to reporting from People, the boy was sitting behind the wheel of a Lamborghini... which managed to reverse into a parked BMW. According to a rep from Affleck, “There was no damage. Everyone is okay.” (Phew.)

After marrying Lopez, Affleck became step-father to her 14-year-olds twins Max and Emme, whom she shares with Marc Anthony. On Instagram, she posted a sweet tribute to Affleck on Father’s Day, calling him “the most caring, loving, affectionate, consistent and selfless Daddy ever.” In a longer post on OnTheJLo, she wrote in more detail about Affleck as a father to his own children and the way he’s welcomed Emme and Max into his life. (And, indeed, he’s been seen in public in their company on numerous occasions.)

“I have had a front row seat to watching how you father for over a year now and I have never seen more consistent, loving and selfless father,” she wrote. “And its not just to your own kids but also without obligation to mine as well. You show up and put them first always. You are affectionate and engaged in every moment they are with you and it’s honestly one of the most beautiful things I have ever seen. Thank you for all you do for all of us. We appreciate and love you beyond measure.”