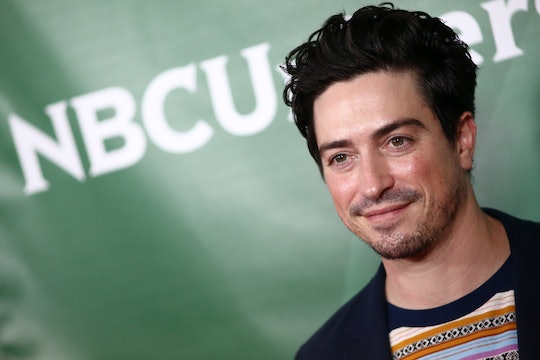 “I’m still holding my breath that at some point he’s going to believe in monsters.”

Ben Feldman is looking forward to the day when his son Charlie, who turns four this fall, starts to believe there are monsters living under his bed. It’s not that Feldman, who voices the character of Tylor Tuskmon in Disney’s new series Monsters At Work, enjoys seeing either of his two young children scared. It’s that he’s eager to finally get an uninterrupted night’s sleep — and honestly, what parent could blame him?

“You know what, I keep wanting them to [believe monsters lurk under the bed] and here’s why: It’ll keep them in the bed,” the 41-year-old father of two tells Romper. “If my kid believed that he would stay in his bed and he wouldn’t come upstairs in the middle of the night and yell at my wife and I or wake us up at 5 a.m.”

For now, however, Charlie remains undaunted. Although, not for lack of trying on Feldman’s part. “I’ve read him books and there are pictures in the books of the monsters reaching out and grabbing toes and eating the kid’s feet,” the Superstore actor says.

Still, Feldman is holding out hope. “I’m still holding my breath that at some point he’s going to believe in monsters. Maybe after this show,” he says, referencing Disney’s upcoming Monsters At Work series, which picks up exactly where the award-winning Disney Pixar film Monsters, Inc. left off. “Except they’re not intimidating on this show so he’ll probably get out of bed and look for them.”

Feldman is right. The monsters in Monsters At Work are neither gruesome nor scary. In fact, scaring children, in general, is out now that the Monsters, Inc. power plant has learned that children’s laughter generates 10 times the energy that screams did. That change causes some frustration for Feldman’s character Tylor Tuskmon, who has wanted to be a Scarer at Monsters, Inc. for as long as he can remember.

But when Tylor is finally offered a job at Monsters, Inc. he finds the company in something of a crisis following Mike Wazowski (voiced by Billy Crystal) and James P. Sullivan’s (voiced by John Goodman) discovery about laughter. While Tylor graduated from Monsters University at the top of his class, he quickly discovers that making children laugh is a lot harder than frightening them. As a result, he’s temporarily reassigned to the Monsters, Inc. Facilities Team (MIFT), where he’ll work alongside quirky monsters like Val Little (voiced by Mindy Kaling) and Fritz (voiced by Henry Winkler) while taking comedy classes on his lunch hour.

Feldman describes the show as a workplace comedy that’s uniquely suited to entertain both children and adults. “It’s all about being funny,” he says. “The energy or the sort of currency of the entire show is laughs rather than scares. I love that as a dad because whenever I watch any cartoons with any element of scariness my kids run away and hide. So this will be a fun thing that I get to watch with my kids.”

Of course, the jury is still out on whether Feldman’s two kids — 3-year-old Charlie and 2-year-old Effie — can be convinced that dad’s latest job is something they’ll want to watch. “I showed them a trailer and my youngest, my daughter, she just goes, ‘Daddy purple’ because I would point to the monster and go, ‘that’s me,’” Feldman jokes. “My son, who's a little bit older, he's either super creative and an incredible storyteller or just like a psychopath and pathological liar. He is adamant that he was aware of the show, that he's already seen it, and that it is old news that I’m in it.”

Monsters At Work premieres with two episodes on July 7 on Disney+ with new episodes dropping every Wednesday.