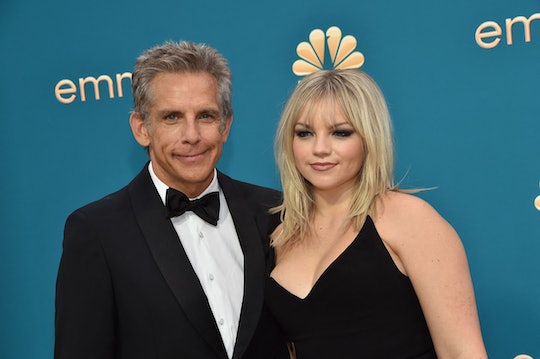 When Ben Stiller arrived on the red carpet at the 2022 Emmy Awards on Monday, he made it a sweet little family affair. Severance director brought his daughter Ella along as his date, and truly his proud smile as the two posed for photos said it all.

Stiller, who earned two Emmy nominations for Severance, brought his 20-year-old daughter Ella to the 74th Emmy Awards to pose alongside him on the red carpet. He wore a classic tuxedo while Ella, who he shares with wife Christine Taylor alongside the couple’s 17-year-old son Quindlan, wore a classic black spaghetti strapped dress. And as she said in an interview on the red carpet, Ella is “so proud” of her dad, adding “he’s the best!”

It probably didn’t hurt that Stiller had just admitted in an interview with E! that he would “probably” be willing to cast Ella in Severance. Although I think he was kidding.

Ella already has a bit of a reputation for busting her dad’s chops if she thinks he needs it, so perhaps she would be a great addition to Severance. Stiller opened up in an interview with Esquire this summer about how his daughter had called him out for not being around much when she was a child. “She’s pretty articulate about it, and sometimes it’s stuff that I don’t want to hear. It’s hard to hear,” he said at the time. “Because it’s me not being there in the ways that I saw my parents not being there. And I had always thought, ‘Well I won’t do that.’”

The Meet the Parents star went on to admit that he had to learn that his kids “are not keeping score” about his career, instead they just “want a parent who’s emotionally present and supportive of them. That’s probably what they want more than for me to be going off and pushing the bounds of my creativity.”

Now that Ella is at the Emmys, getting interviewed on the red carpet alongside her dad, I wonder if he feels like he earned some extra points? We’ll keep our fingers crossed for him.

More Like This
Nick Cannon Announced The Birth Of His 9th Child, A Daughter Named Onyx
John Mulaney Teaches His Son To Say "Ahh" After Drinking Water In A Super Cute Video
Kanye West Apologizes To Kim Kardashian For The Stress He Caused The Mother Of His Children
Ryan Reynolds Joked About Wanting To Duct Tape An iPad To His Kids' Faces