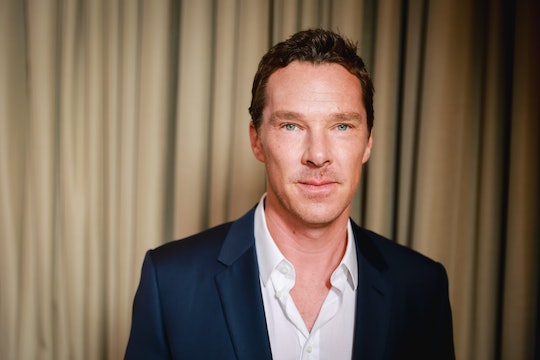 I guess we know who to thank for The Grinch!

Benedict Cumberbatch is nominated for an Oscar for his startling performance in Jane Campion’s Netflix movie Power Of The Dog, but in reality he’s already winning at life. He is a hugely respected actor who manages to move seamlessly between big budget films and independent dramas, has a massive fan following, and oh yes, a sweet family that he clearly adores. Here’s what you need to know about the people closest to him.

Benedict Cumberbatch met his wife, Sophie Hunter, back in 2009 when they were both working on the set of the movie Burlesque Fairy Tales. They didn’t start dating right away, however, as he was seeing actress Olivia Poulet at the time. But she clearly caught his interest back then. Honestly how could she not? She’s very interesting.

Hunter is a well-known theater director who has worked in the U.S. and the UK. She has served as the director at the Royal Court Theatre in London, co-founded the Lacuna Theatre Company, and has directed opera performances, theater performances, and she is also a playwright. Oh and an actress who once starred opposite Reese Witherspoon in Vanity Fair.

For good measure Hunter is also a musician who has recorded both an album in French (The Isis Project in 2009) and in English (Songs for a Boy in 2011).

He reportedly asked his wife’s mother for permission to marry her.

According to The Daily Mail, Hunter and Cumberbatch were dating for about a year before they got engaged. And before Cumberbatch popped the question, he flew to Edinburgh, Scotland to ask her mom’s permission to marry her. Traditional with a twist.

Their 2015 wedding venue was special to Sophie.

The happy couple tied the knot on Valentine’s Day in 2015 on the Isle of Wight in a 12th century stone church. Their reception was held at Mottistone Manor, which holds a special place in Hunter’s heart, according to People: She is related to the owners of the manor. They also announced their wedding the old-fashioned way; by placing an ad in the newspaper. “It’s what I would have done if I wasn’t sort of famous,” Cumberbatch told People. “It’s what we do. It’s a kind of traditional thing to do.”

Hunter and Cumberbatch welcomed their son Christopher Carlton in June 2015, and reportedly refer to him as “Kit.” And Kit’s dad was an instant goner for his little boy, “For years, I assumed my parents to be one thing, but when you have children yourself your perception of them changes, as does the things they have done over the years,” he told The Daily Mail in 2015. “You interpret events and actions differently and take a much deeper understanding of what it is they did for you and went through for you. It’s a lovely thing.”

They also have a son named Hal.

Kit was just 2 years old when he became a big brother to Hal Auden Cumberbatch in 2017. The Imitation Game actor opened up about his baby preparation on Live With Kelly & Ryan in 2016, “They say it takes a village for one and it probably takes a city for two,” adding that he was as “prepared as you can be” to welcome little Hal. Naturally ever the private couple, neither Cumberbatch nor Hunter have ever shared photos of their little ones.

Becoming a father has inspired him to take on kid-friendly roles.

The arrival of Hal did end up affecting the way Cumberbatch saw his career. He told Good Morning Britain in 2017, “I want them to know what I do for a living and they can’t always because of the certification of my films, we’ll all be a lot older by the time they get to see them. I would definitely like to do some child-friendly work in the future, I’ve done a bit but there might be a bit more of that.” I guess we know who to thank for The Grinch.

In 2019, the couple’s youngest son, Finn, was born, giving the actor a “batch” of boys: “I might go for a (Cumber) batch of boys,” he said on the Graham Norton Show in 2016, per The Daily Mail. “It’s what being a parent is about so it’s not an excuse to get away from what I am doing — it’s what I ought to be doing. After three and half hours of Hamlet, I think that’s okay.”

More Like This
Chris Pratt & Katherine Schwarzenegger Welcomed A Baby Girl With The Prettiest Name
Why Prince Harry Feels Lucky To Be A "Father With A Platform"
Ray Liotta Has Died At 67. Not Only Was He An Iconic Actor, He Was A Proud Dad.
Kate Middleton Explains Why Her Kids Couldn't Attend The Top Gun: Maverick Premiere