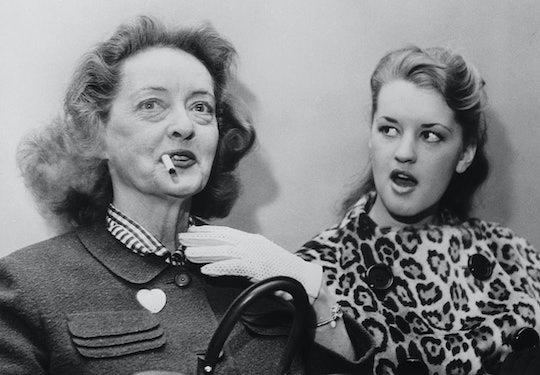 For those who weren’t aware of all the drama, Ryan Murphy’s 2017 docudrama television miniseries, Feud: Bette and Joan, laid out the well-documented rivalry between Hollywood actresses Joan Crawford and Bette Davis. As played by Jessica Lange and Susan Sarandon, respectively, the Crawford versus Davis battle centered on the events taking place during and after the production of the 1962 psychological thriller What Ever Happened to Baby Jane?

With actress Kiernan Shipka's impressive performance as Bette Davis' daughter on Feud, fans have naturally grown curious about the relationship between the screen legend and her oldest (and only biological) child. Davis and Crawford's familial relationships aren't the central plot of Feud, but they are an integral component that ties into explaining who Davis and Crawford really were as women, humanizing the larger-than-life screen legends behind the ensuing feud. While Davis died in 1989, all three of her kids are still living — which leaves the question, where are Bette Davis' children now?

On Feud, Shipka portrays a young version of B.D. Hyman (born Barbara Davis Sherry, to Davis and her third husband William Grant Sherry), at the time of filming for What Ever Happened to Baby Jane?, when her name was B.D. Merrill, having been adopted by her mother's fourth husband, Gary Merrill. While it's obvious enough just from watching the series that the two weren't close, B.D. is included in the series because (in real life) she was actually on set while all of the drama between her mother and Crawford was going down. As the series showed, Hyman had a part in the movie, with Davis having scored her daughter (then an aspiring actress) a brief cameo appearance as a neighbor girl in one scene.

Nowadays, Hyman is an author and evangelical pastor. A then 16-year-old Hyman had a falling out with her mother when she married a much older man (29-year-old Jeremy Hyman) in 1963, which led Davis to be estranged from her two grandchildren, Justin and J. Ashley Hyman. Over 20 years later, when Davis was in failing health, Hyman took a page out of Christina Crawford's book and published an unflattering memoir called My Mother's Keeper about growing up under her mother's allegedly abusive care.

In addition to her writing, Hyman also maintains her own YouTube channel for "The B.D. Hyman Ministry," where she espouses her evangelical beliefs, including a claim that her mother had practiced witchcraft and had put a "demonic" curse on her and her family.

By the time Davis died in 1989, their relationship was irreparably damaged. The actress wrote out Hyman and her other daughter, Margot Mosher Merrill, from her will, ensuring they would receive nothing from her nearly $1 million estate: "I declare that I have intentionally and with full knowledge omitted to provide herein for my daughter, Margo, and my daughter, Barbara, and-or my grandsons, Ashley Hyman and Justin Hyman."

Margot, for her part, was adopted as an infant by Davis and her fourth husband. As a toddler, Margot was diagnosed with brain damage, resulting in developmental and mental disabilities. Davis attempted to care for her daughter, but she eventually relented and sent her away to Lochland School, a home for developmentally disabled children, where Margot has remained for the rest of her life.

Michael Merrill (pictured above at a Bette Davis Centennial Tribute in 2008, alongside his mother's longtime personal assistant Kathryn Sermak) was also adopted while Davis was married to Merrill and is the last of the screen legend's three children. Michael refuted his sister's claims of abuse and remained Davis' only child to be represented in her will.

Davis' relationships with her children eerily mirror Crawford's in many ways. From similar falling-outs with their eldest daughters to the split between children who alleged they were abused and others who flat-out deny it, it's clear that Davis and Crawford might not have been so different after all, in some respects.

This article was originally published on March 26, 2017