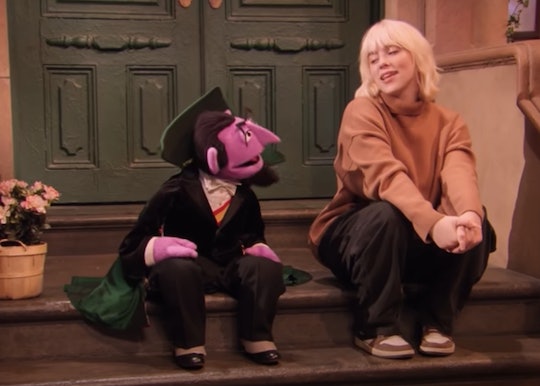 Who knew a lesson on counting to the number two could be so heartfelt? Grammy award-winning singer Billie Eilish performed a special rendition of her hit single “Happier Than Ever” with Count von Count to kick off the newest season of Sesame Street. While the lyrics were changed a little, of course, to fit the theme of numbers, it’s still very much a bop. A kid-friendly bop.

“When I'm counting with you, I'm happier than ever,” Eilish sings in a snippet of the episode on YouTube.

“Numbers sound so much better,” Count follows up.

“Here is what we’ll do, come on, let’s count to two, one two of Burt’s sweaters,” the singer then croons to Burt.

Big Bird and the Two-Headed Monster also make appearances in the duet. The two go on to serenade each other, singing, “When I’m counting with you, I’m happier than ever, numbers sound so much better. Now let’s count me and you.”

Eilish’s “Happier Ever After” debuted number one on Billboard’s Top 200 this past August and had the second-highest vinyl sales week since at least 1991, according to The New York Times.

Sesame Street’s 52nd season will have 35 episodes and feature other celebrity guests such as Amanda Gorman and Naomi Osaka. Rapper Anderson Paak will also perform a song for the season's Martin Luther King Jr. Day episode. Fans will also get to meet Elmo’s new puppy Tango!