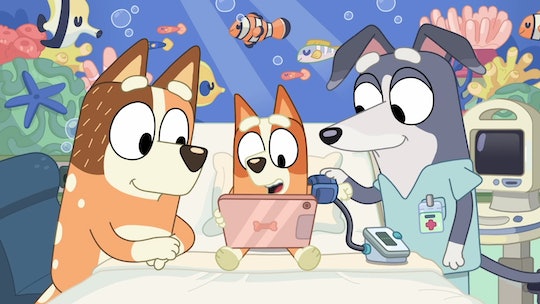 A viral TikTok has broken down all the evidence.

Somehow, Bluey is always spot-on when it comes to depicting life with young children. From parents keeping kids happy while waiting for fast food to kids playing pranks on Mum and Dad, this Australian kids’ show on Disney+ never fails to entertain and educate. But it’s also sparked a variety of fan theories on TikTok. One viral theory, for instance, suggests Bingo is possibly gluten-free or has celiac disease.

Celiac disease is a serious autoimmune disease that leads to damage in the small intestine when gluten is ingested, according to the Celiac Disease Foundation. It is estimated to affect 1 in 100 people worldwide. Some people who don’t have celiac disease can still have a non-celiac gluten sensitivity (NCGS) characterized by intestinal reactions related to ingesting gluten. One way to manage symptoms is by eating gluten-free foods, which include fruits, vegetables, meat, poultry, fish, seafood, dairy, beans, legumes, nuts, and gluten free grains.

The theory is based on four Bluey episodes.

The second episode is Season 2, Episode 8, “Daddy Dropoff,” where Bandit is taking the kids to school instead of Chili. @world.shaker shows a clip of this episode, showing Bandit packing lunches for Bingo and Bandit. He says, “OK, gluten-free,” as he puts a wrapper in one box and “gluten-not-free” as he puts something else in the other lunchbox.

The third episode is Season 2, Episode 27, “Grandad.” According to @world.shaker, this episode shows Bluey and Bingo eating their lunch boxes in the car. “The one that Bingo has is the one that’s getting the gluten-free food,” he says..

Finally, in Season 1, Episode 45, “Kids,” it shows Bandit and Bingo at the grocery store, and Bandit is putting only gluten-free foods in the shopping cart.

Because Bandit doesn’t use a clean surface when preparing food for Bingo, @world.shaker doesn’t think Bingo has celiac disease. Instead, he suggests, “I do think she might have a gluten intolerance.”

Could another character be gluten-free instead?

If you look back at “Daddy Dropoff,” Bandit actually says it’s the purple lunchbox that is gluten-free — which is the one Bluey eats in “Grandad.” Would this suggest that Bluey is actually the one who is gluten-free?

A Bluey fan commented on @world.shaker’s video that maybe Bluey’s friend Indy is the one who is gluten-free, and Bluey’s lunchbox is filled with gluten-free foods so as to prevent cross contamination. “The GF is the purple lunch box, which I thought was because Indy has a severe gluten intolerance so all the kids eat GF at school,” they said.

In Season 1, Episode 20, “Markets,” we learn that Indy isn’t allowed to eat wheat, gluten, sugar, dairy, or food with added ingredients, although it doesn’t mention why. In the same episode, Bingo eats a German sausage with a bun, suggesting maybe she isn’t gluten-free.

In the Bluey subreddit, many Redditors believe the kids’ school requires gluten-free foods. One commenter said, “I always assumed that it was something related to one of the kids’ schools prohibiting gluten because of one of the kids (not necessarily Bluey or Bingo) has an allergy.” Another explained, “They go to a tiny Waldorf school. I'd be surprised if it wasn't gluten-free. The one near me is.”

The Australian nonprofit organization Coeliac Australia even talked about this theory. On a Facebook post in April 2020, they asked members who on Bluey was gluten-free. Later, they commented, “Based on the comments from all the Bluey fans on this post, appears it's Indy.”

Although no character is explicitly gluten-free, Bluey does often talk about being gluten-free and avoiding foods with certain ingredients (like Indy does in “Markets.”) Many kids have nut, dairy, or gluten intolerances or other food allergies, so it’s awesome to see it explained and normalized at a level kids can understand.

For now, the gluten-free theory remains just a theory. But it’s still cool to see this representation in a kids’ show!