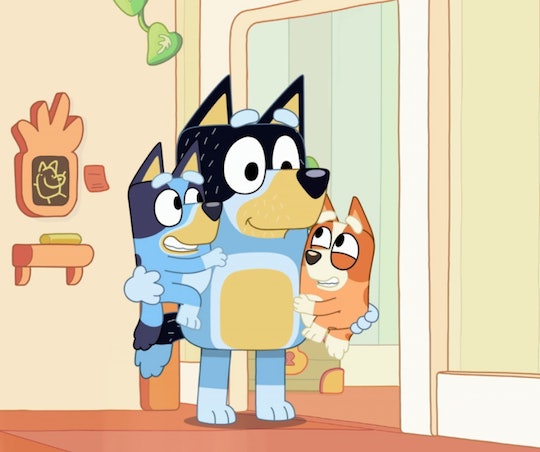 We still haven’t gotten over the last Sad Bluey Theory!

If you have a children younger than middle school, chances are you’re at least sort of aware of the show Bluey. The charming Australian children’s show has found fans of all ages: kids love the delightful, funny, talking dogs and parents appreciate the nuanced — weirdly accurate — depiction of family life (down to dad Bandit constantly getting accidentally kicked in the crotch all the time). But recently, TikTok user @world.shaker (whose bio reads “Walmart Seth Rogen; Licensed Girl Dad; Bluey stan account”) recently made a video delving into a Bluey theory about Bandit’s dad, Bob Heeler.

“Every so often someone comments this on one of my Bluey videos that they think that Bandit’s dad, Bob, is dead and... I agree,” he says. Honestly, he lays out a strong case for the possibility that poor Bob has either died or had to move to a care facility as the result of dementia.

This is not the first time @world.shaker has suggested sad realities have crept into the children’s show. Back in September of 2021, he suggested that the show hints at the idea that Bluey is a rainbow baby or that her mom, Chilli, otherwise suffered a miscarriage at some point.

As with his previous theory, this latest requires some “reading subtle hints between the lines,” but is nevertheless not really a stretch. He points out that Bob has only appeared on the show once in the fan-favorite “Grannies” episode, attempting to floss with Bingo and Bluey’s Nana. After that, he only appears in pictures or flashbacks, which is a little bit... odd.

Because in subsequent episodes, though Bob appears pictures in the background, he is never there. Even when the pups go to Nana’s house to be babysat

Or when the whole Heeler family is over for Christmas...

Or at Bingo’s birthday...

Bob is mentioned a couple times after his first and only (contemporary) appearance, and @world.shaker suggests that such mentions in Season 3 (which has not yet hit the United States) offer some more hints at a possible death or illness, such as references to the grandfather being unable to remember who Bingo (his granddaughter) is, suggesting he is either struggling with or has died from dementia.

“The show doesn’t shy away from tough topics,” he said in the video. “I wouldn’t put it past the writers.”

Whether or not this theory holds water is yet to be seen. Season 3 of Bluey is currently airing in Australia, but American audiences don’t yet have a date to look forward to for new episodes.