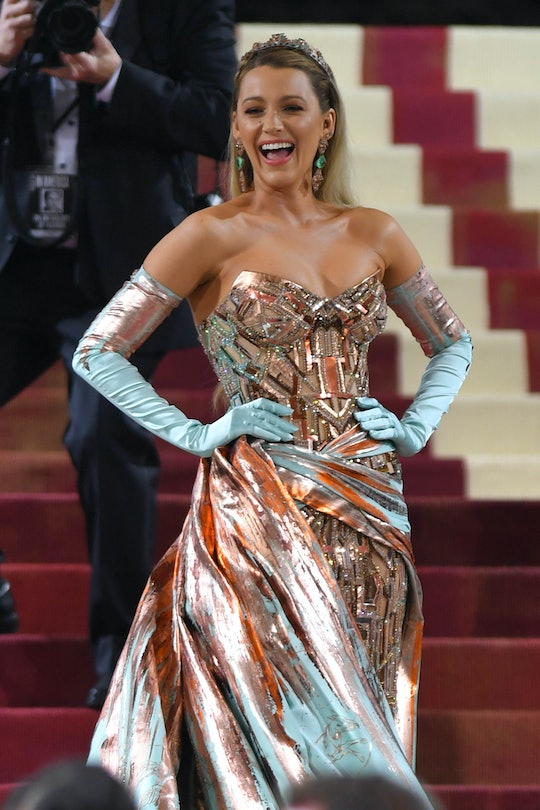 Blake Lively Reveals Her Secret Ingredient For Being More Confident

Actually, she’s got three of them.

Blake Lively has been busier than ever these days, transfixing us with that color-changing dress at the Met Gala, reprising her role as your favorite naughty mom in A Simple Favor 2 , and now she’s adding her bubbly venture as a drinks mixing mogul to her resume, too. And while the actress, mom, and red carpet showstopper might seem like she’s sipping from an endless stream of confidence, you might be surprised what Lively considers the source of her ease and self-esteem — her three daughters.

In a recent interview in Forbes, the 34-year-old talked about her new sparkling beverage business, Betty Buzz, and shared that motherhood is what makes her feel her best, not just emotionally, but physically too. “I think having children for me made me feel so much more in my skin. I never felt more myself or at ease in my own body or more confident — not to say that there aren't a bevy of insecurities coming at me a million times a day, but I just feel incredibly settled,” Lively said.

Lively is married to actor, fellow entrepreneur, and gin-slinger, Ryan Reynolds. It’s no coincidence that they’re both making big moves in two of the same industries. “I mean, everything we do, we do together, for better or worse,” she told Forbes. The hilarious and sappy couple share three sweet daughters, 6-year-old James, 5-year-old Inez, and 2-year-old Betty.

It’s always been important for Lively to be a shining example of a working mom for her daughters. Lively is not only making waves with Betty Buzz, she created a ton of buzz when she announced that she’s gearing up to make her directorial film debut. Lively seems pretty proud of her business accomplishments and shared her interview with the famed money magazine in a recent Instagram Story. “Oh hi Forbes,’ the Sisterhood of the Traveling Pants star wrote over the story.

Although Lively might have convincingly played a champagne-guzzling NYC teen socialite or playdate boozing mom in her acting roles, the Gossip Girl alum actually doesn’t even drink. So while it might seem like an unusual decision to develop a line mixers, according to the Betty Buzz website, Lively believes “mixers are the unsung heroes of the drink world and deserve just as much love as alcohol.” More importantly, the proud mama has her kids in mind for this business venture too. “Family is at the root of everything that I do and it’s also at the root of everything that I create....That’s part of the reason why Betty Buzz was important to us, that my kids could drink them, as well as me,” she told Forbes.

Mocktails with the kiddos on a sunny afternoon? We’ll definitely drink to that.