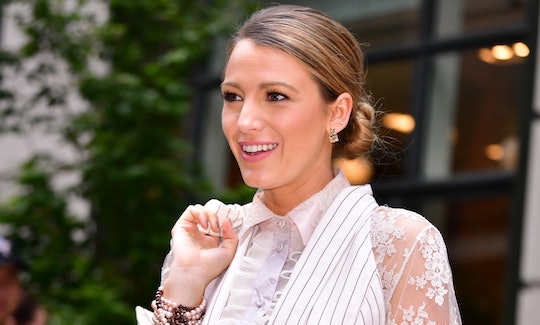 “The best way to be the best mother is to show them that you can have a life and have a passion and have an identity outside of just being a mother.”

While most of us aren’t A-list Hollywood stars with resumés that include fan-favorite hits like Gossip Girl or The Sisterhood of the Traveling Pants, Blake Lively’s desire for her daughters to see her working hard and enjoying her career is something so many parents can understand. Beyond showing her children the importance of carving out an identity just for you, the 34-year-old actress opened up in a recent interview about wanting to set an example for her girls.

In a recent interview with People, Lively opened up about wanting to be “present” but also a positive role model to 6-year-old daughter James, 5-year-old daughter Inez, and 2-year-old daughter Betty. “I want to be as present of a mother as humanly possible and I want them to feel my presence, but I also think the best way to be the best mother is to show them that you can have a life and have a passion and have an identity outside of just being a mother,” the Shallows actress explained.

“I mean, being a mother is completely all-encompassing, and that doesn't mean there are a lot of mothers who don't have the opportunity to work as well, but just having your [own] identity is, I think, very important,” she told People. “And teaching them that they can maintain themselves and that everything is possible [is crucial].”

The mom of three went on to say that she doesn’t just want her daughters to be aware that their mother works; she wants them to physically see her work as well. “I bring them along, though,” Lively shared with People. “I mean, it's amazing they're not hidden under my skirt right now. I bring them everywhere. It's so inappropriate, but I'm very lucky to be at a job that allows me to do that.”

From the time her daughter James was just a toddler, Lively has been mindful of what the little girl sees and how it might affect her. For instance, back in 2017 the Gossip Girl actress admitted that she will not call her toddler “bossy” as it sends the wrong message. “There would never be any negative connotation for a man being a boss, so to add a negative connotation on a woman being a boss? It's belittling,” she said, per USA Today. “It doesn't encourage them to be a boss.”

Lively isn’t the only parent in the house who wants to set a good example of finding balance; her husband Ryan Reynolds made headlines recently when he announced plans to take a hiatus from acting to focus on his family. “You don’t really get that time back,” he explained in a recent interview with The Hollywood Reporter, and didn’t give a definite timeline of his return.

Ryan Reynolds and Blake Lively are consciously parenting their three daughters. Leading by example, showing them that outdated gender stereotypes don’t need to be a part of their lives.